The Punisher: The Ultimate Payback 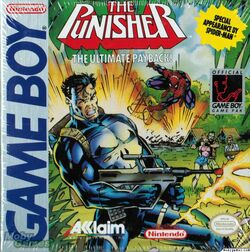 Spider-Man tells the Punisher that a drug lord is in a mall and you have to shoot the bad guys while Spider-Man swings in and saves the innocents. Then there are several more locations (five in all) where the Punisher has to shoot more bad guys. Finally, he faces Jigsaw and kills him.

While the game was a port of The Punisher released for NES a year earlier, the game's story was greatly altered, and Spider-Man was introduced into the mix.

Like this? Let us know!
Retrieved from "https://marvel.fandom.com/wiki/The_Punisher:_The_Ultimate_Payback?oldid=6462077"
Community content is available under CC-BY-SA unless otherwise noted.