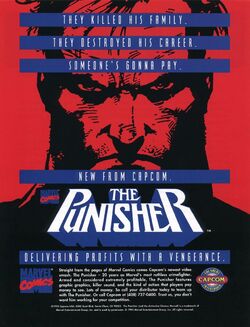 In the game's intro, U.S. Marine Captain Frank Castle enjoys a picnic with his family in Central Park. The Castle family accidentally discovered a mob killing. Fearing any witnesses, the killers gunned down the family. To avenge them and all others like them Frank becomes The Punisher. The game begins in an illegal casino and the streets of the New York City, with the merciless vigilante Frank "the Punisher" Castle (optionally partnered with S.H.I.E.L.D. agent Nick Fury) in pursuit of the Mafia enforcer Bruno Costa who ordered the killing of Castle's family; the chase ends with a fight against Chester Scully (a minor villain from the comics). Frank "interrogates" Scully, gets the information he needs, and then promptly shoots him. Still on track of Bruno, the Punisher infiltrates the mob's Pantaberde resort in Florida via a water duct. He breaks into a hotel and corners Bruno, who is suddenly killed by a robot called Guardroid, who tells Frank the Kingpin has programmed him to terminate him, which the Punisher must then take on.

The Punisher then raids a major drug-smuggling ring at the local harbor, which ends with him confronting Bonebreaker in a waterfront warehouse. After that, the Punisher attacks the Kingpin's poppy field at a cave in Arizona. The Punisher boards and destroys a freight train which is commanded by Bushwhacker.

At that point, the Kingpin decides that he has lost enough henchmen and money to the Punisher's actions. He puts a hefty contract out on him, and he is chased by assassins from his hideout and through a forest. After defeating another Guardroid, the Punisher in turn assaults the King Building skyscraper. He fights his way through Jigsaw and other enemies to the final showdown against the Kingpin himself. After the Kingpin is defeated, the entire tower collapses, but the Kingpin is not found among the many dead criminals in the rubble.

The Punisher Arcade Gameplay Multiplayer
Add a photo to this gallery

Like this? Let us know!
Retrieved from "https://marvel.fandom.com/wiki/The_Punisher_(1993_video_game)?oldid=6462074"
Community content is available under CC-BY-SA unless otherwise noted.