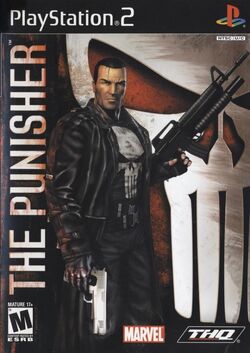 Alternate costume skins can be unlocked at the Cheat Screen. They will only appear on Level 6 (Gnucci Mansion) and Level 8 (The 'Igor Baltiysky' ).

Never point a firearm at anything you are not willing to destroy.[2]

These items can be found lying around on the floor or on counters or tables. Both The Punisher and his opponents can pick them up.

The game begins with the Punisher killing footmen of the Yakuza. After he leaves the building, he is arrested by Police officers and is then transferred to Ryker's Island and interrogated by Detectives Molly Van Richtofen and Martin Soap. He then recalls the events leading to his capture.

The Punisher rooms the street in front of a Crackhouse. He invades the crack house and kills its owner (dubbed "Damage") by dropping him from several stories above the ground. After almost getting hit by a car upon his exit, the Punisher traces the vehicle to a chop shop. After killing every criminal there, he learns that it is owned by the Gnucci mafia family (led by Ma Gnucci) because Carlo Duka (the individual owner of the shop) is a Gnucci lieutenant. The Punisher kills Duka by dropping him in a car compactor where Duka is subsequently crushed. In a subsequent mission, the Punisher kills Bobby Gnucci (one of the sons of Ma Gnucci) at Lucky's Bar by shooting him several times.

Ma Gnucci hires Bushwacker to capture Joan, a neighbor of the Punisher. The Punisher traces her to the Central Park Zoo, where he rescues her. The next mission occurs in Grey's Funeral Home, at the mob funeral of Bobby Gnucci. The Punisher kills Eddie Gnucci (the other Gnucci son) by throwing Eddie out a window and Eddie is impaled on a gate spike. The Punisher then travels to the Gnucci estate to kill Bushwacker and Ma Gnucci herself. After fighting his way through Ma's remaining men, Punisher then fights Bushwacker who he defeats in a gunfight. To finish off Bushwacker, Punisher rips his weapon arm off and shoots him in the chest followed by Punisher dropping Bushwacker several stories above the ground. Castle then throws Ma through her mansion's top floor window.

During the Punisher's assault at the Gnucci residence, he learns that the Gnuccis are getting drug money from Russian mercenaries on New York City's waterfront. At the docks, he hears that General Kreigkopf plans to smuggle nuclear weapons into New York City. After attacking men on a cargo ship supposedly carrying the weapon (it was not on board) and being assaulted in his apartment by a huge man called the Russian, the Punisher attacks Grand Nixon Island, his next lead on the weapon's location. On the island, the Punisher meets Nick Fury, who helps him to defeat Kreigkopf and the Russian as well as prevent the launch of the nuclear device. Both escape before the missile detonates, destroying Grand Nixon Island.

Returning home, the Punisher discovers that the Kingpin has been taking over former Gnucci rackets. He raids the headquarters of the Kingpin's Fisk Industries, where he fights and defeats Bullseye by throwing him out a window from the top floor of the skyscraper. The Kingpin tells the Punisher that his real enemy is the Japanese Yakuza. The Punisher learns that this group of Yakuza are called the Eternal Sun, and they are trying to control remaining Gnucci and Russian crime operations.

The Punisher then visits Stark Towers, a facility owned by Tony Stark (Iron Man) and after learning that the Eternal Sun are attempting to steal some high tech weapons and armor. The Punisher decides to assault the Takagi building, the home of the Eternal Sun leader, Takagi. He discovers that Jigsaw has infiltrated the gang, and is gaining followers. While Jigsaw is being imprisoned in Ryker's Island, the Eternal Sun is already planning to bust him out. After escaping the Takagi building, the Punisher allows himself to be captured by Det. Martin Soap, who has been providing information to the Punisher, and taken to Rykers Island, to confront Jigsaw there, at which time, the flashbacks catch up to the story, and the remainder of the game takes place in the present.

During the interrogation, the prison erupts into a riot. The Punisher escapes from his cell, and starts fighting his way through the sea of inmates. He manages to make it to the rooftops faces Jigsaw. Ultimately defeating him despite the stolen Iron Man armor Jigsaw was wearing. As the Punisher leaves in a helicopter, he throws Jigsaw out, killing him.

In the post-credits scene, the Kingpin is plotting his revenge against the Punisher for the embarrassment he caused him as a medical worker is loading Bullseye onto a stretcher.

Like this? Let us know!
Retrieved from "https://marvel.fandom.com/wiki/The_Punisher_(2005_video_game)?oldid=7034839"
Community content is available under CC-BY-SA unless otherwise noted.