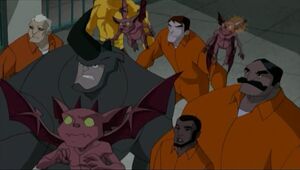 A supervillain prison has been built by Norman Osborn to keep such people where they belong. One such prisoner is quickly led to a cell. While this happens, Osborn, Jameson, and Captain Stacy watch on, while Jameson gloats of "his victory". The villain in question? SPIDER-MAN. Turns out, however, that Spider-Man has merely volunteered to test out the prison's security system and Jameson is gloating about Spider-Man being locked up because he really hates Spider-Man. After being in his cell for five minutes, a Selina Drew supposedly delivers another person to prison. The problem is, Selina Drew is Black Cat.

Meanwhile, Midtown High is preparing to put on a play for A Midsummer Night's Dream, but one of the actors - Harry, who is playing Puck - is beyond late. Mary Jane calls Gwen, but she hasn't seen him all day and only knows he is very excited for the play. Liz calls Peter and reminds him via voicemail that she had reserved a seat for him by her parents - and to find Harry.

Black Cat - whose real name is Felicia Hardy - is able to break through the pipes and continue on her way. After about a hour, Spider-Man still hasn't planned a way to break out, and he can't miss the play, as Liz is already worried. To Gwen's surprise, Harry's butler ends up sitting next to her. When Harry still won't show up, the director is left with only one choice - HE will play Puck. Uncomfortable with the idea, the kids shift the focus onto one of the other actors, and the director agrees (much to his dismay).

Spider-Man finally discovers how he can escape, while Osborn has to leave in what is secretly his criminal business. Peter uses his webshooters to blanket the entire cell, and when guards arrive, he uses the lightning system and a web cartridge to smoke everything. Spidey runs away (which makes Jameson furious), and security doors activate everywhere. After some time, though, none of them respond, and while Spider-Man has clear passageway, the police officers are trapped wherever they are. It is then revealed that the Green Goblin has hacked the system into doing what it is doing. As Spidey makes his way up the elevator shaft, Goblin activates it. Spidey manages to break open a door and escape death, but finds himself with the other supervillain prisoners. He starts bantering at them, only for Goblin to open the prison doors for the prisoners just as the play starts. Liz is clearly saddened when she sees Peter is not in the audience.

Peter is able to web up most of the villains, but soon discovers that Mysterio is actually a robot. As he fights them, it is revealed that one of the prisoners didn't make his move. A hole is suddenly cut in the ceiling of his cell, and Black Cat comes in, saying "Hi Daddy". Mysterio eventually releases three Humonculi, and Jameson praises them for attacking Spidey. Captain Stacy then forces him to admit Spidey is the only hope for the prison. Mr. Hardy chastises Felicia for putting herself at risk. When she discovers Spider-Man is present, she ends up helping him, and also reveals her feelings for him. They defeat the last of the villains, and Spidey webs her and, unbeknownst to him, Hr. Hardy inside a cell to prevent further harm. It quickly becomes coincidental that the fight is synonymous in action and words with what is going on at the play. Gwen sees that Harry has been replaced and really gets worried.

The Goblin sees that Black Cat is present, so he releases Rhino and Molten Man for him. Spider-Man asks what she is doing here, and she confesses that she is here to break out her dad, The Cat Burgler, aka Walter Hardy. And Walter Hardy was the man that killed Uncle Ben.

Rhino breaks open the cell where Spidey is hiding, and screams in frustration when he discovers he escaped. The three start crawling down the airlock, with Spidey constantly chastising Walter for what he had done. As Molten Man heads up the airlock, the three break into the trank gas storage, but someone has to break it open manually in order to release it throughout the prison. Spidey heads back out a different way, and the villains see him and synonymously say "Get him!" (though one Humonculi says "Pistachio"!). They chase Spidey, and he heads down the stairs and destroys the Humonculi. After tricking Molten Man into destroying the Mysterio robot, he takes them into the gas room. Spidey traps them in there, where Walter turns on the gas. It is revealed in a flashback that Walter said he had done a terrible thing for killing Uncle Ben, and needs to pay for his crimes, despite Black Cat's sadness. Spidey said they are still not even. As the prisoners are gassed, Spidey breaks out, only to be confronted by an angry Goblin. He and Cat fend him off and away, leaving Spidey in a state of shock that he is back. Spidey tries to thank Black Cat, but she says that she will never forgive him, believing that he messed with her father's mind, and flees, leaving Spidey despondent.

The prison is safe, but Jameson is still convinced that Spider-Man is a menace and that he and all the villains are working together to raise his blood pressure. The play then ends before Peter can arrive.

Retrieved from "https://marvel.fandom.com/wiki/The_Spectacular_Spider-Man_(Animated_Series)_Season_2_12?oldid=5248239"
Community content is available under CC-BY-SA unless otherwise noted.