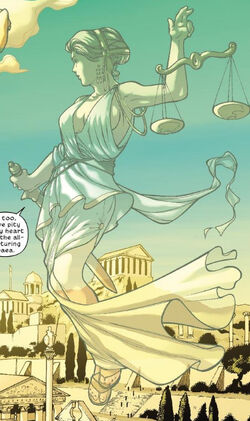 Themis was a Titan[3] goddess said to be Justice incarnate.[4][1] She was a daughter of Ouranos.[3]

One day, Zeus and her agreed on the fact Man was overcrowding Earth/Gaea, and Zeus decided to cause an Ilian War.[4]

Zeus presented his plan to her, starting with the marriage of Peleus and Sea-Goddess Thetis, disturbed by Discord and Strife goddess Eris.[4]

Themis is sometimes depicted as being blind.[1]

A balance scale,[4] depicted with a blindfold.[1]

When he acted as Erik the Red, Magneto had a statue of blind Justice in his base in Antarctica.[1]

Like this? Let us know!
Retrieved from "https://marvel.fandom.com/wiki/Themis_(Earth-616)?oldid=6098894"
Community content is available under CC-BY-SA unless otherwise noted.