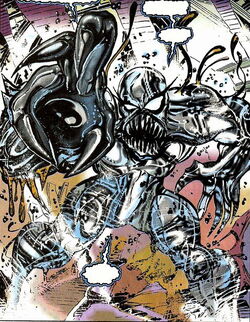 Former professor of young Anthony Stark. He was an influential mentor to the young genius. Slaught grounded the young man's arrogance with reality and urged him to embrace ideas and theories from other colleagues. Years later, Slaught was the esteemed and noted head of Cal-Poly Technical Institute. After some time, Slaught developed Alzheimer's Disease and Stark recommended his removal from the laboratory. Incensed by the "betrayal" of his former prize pupil, Slaught swore revenge. In a later laboratory mishap, an explosion caused Slaught to be transformed into the dynamic-metallic creature known as "Slag". Slag immediately confronted Anthony Stark in his Iron Man guise. After a grueling confrontation, Stark reluctantly cyrogenically froze and then obliterated Slag.

Can generate extreme heat, capable of melting Iron Man's armor. Slag remains in a fluid state and cannot be contained.

Like this? Let us know!
Retrieved from "https://marvel.fandom.com/wiki/Theodore_Slaght_(Earth-616)?oldid=3723034"
Community content is available under CC-BY-SA unless otherwise noted.