They Who Wield Power 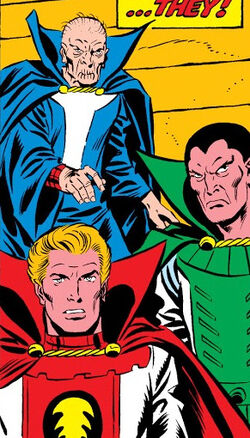 They Who Wield Power was a group organized by Tyrannus. They sent a vision to the Lava Men's witch-doctor Jinku, promising that he would lead his people to conquest, prompting him to try and steal Thor's hammer Mjolnir.[1] they later clashed with the Hulk but were betrayed by their leader, Tyrannus, who stole the power of the sacred flame they guarded, resulting in the deaths of his two compatriots.[2]

The Sacred Flame of Life

Retrieved from "https://marvel.fandom.com/wiki/They_Who_Wield_Power_(Earth-616)?oldid=5551696"
Community content is available under CC-BY-SA unless otherwise noted.