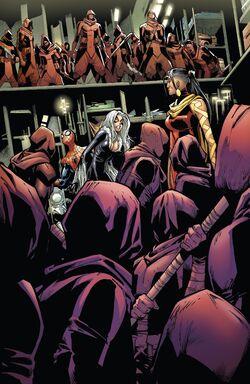 The Thieves Guild is a global secret society of criminals. Different chapters of the Thieves Guild exist all over the world, each with their own set of rules and history.[2]

The Thieves Guild from New Orleans was set up at the same time as the Assassins Guild by Candra. They acted as her private thieves and payed tithe to her every seven years to gain the Elixir of Life. They also hunted for anything pertaining to the 'Old Kingdom' because of the Guild Prophecies.[citation needed]

The origins of the New York branch of the Thieves Guild are murky. Some people believe it started in 1831 and others believe it dates back to the purchase of Manhattan from the Native Americans. The New York branch became involved in every major theft in the centuries to come. Thieves from New York were to offer a tithe of their take, dropping it on a specific fountain in the city. Due to the rise of organized crime and supervillainy, the Guild's influence kept waning until its existence became a myth.[2] After they offended Candra, the New York brand was disgraced and lost access to the Elixir.[1]

When Odessa Drake rose to leadership in the New York branch, she set out to return the Guild to prominence. As part of her plan, she orchestrated the theft of equipment and gear from members of the superhuman community.[3] Guild member Black Cat disagreed with Drake's course of action, and enlisted Spider-Man's help to retrieve the stolen goods. Drake and the Thieves Guild confronted them after they inflitrated the safehouse where the loot was being kept. After Spider-Man managed to alert the superhuman community of their location, Drake and the Guild saw themselves forced to flee. Despite having failed to keep the stolen items, the heist succeeded in putting the Thieves Guild back in the map, prompting criminals to begin offering tributes again.[2]

Like this? Let us know!
Retrieved from "https://marvel.fandom.com/wiki/Thieves_Guild_(Earth-616)?oldid=5511788"
Community content is available under CC-BY-SA unless otherwise noted.