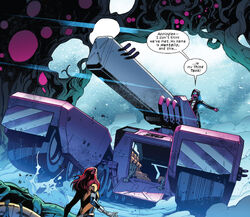 While being transferred to prison, Mentallo was rescued by a team of mutant terrorists known as the Resistants who opposed the Mutant Registration Act. After joining their cause, Mentallo took the new alias of Think-Tank and acquired a small, personal tank of the same name which he controlled via his mind. During a battle between Captain America and the Resistants, the Think Tank was presumably destroyed.[1]

Following his recruitment into S.W.O.R.D., Mentallo repeatedly pestered Wiz Kid into building him a new Think Tank. Significantly larger than the previous model, Mentallo used it to rescue the Five from Krakoa during the Symbiote invasion of Earth.[2]

Retrieved from "https://marvel.fandom.com/wiki/Think_Tank_(Vehicle)?oldid=5889855"
Community content is available under CC-BY-SA unless otherwise noted.