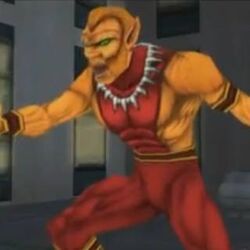 Puma lured Spider-Man into a trap at his warehouse by having Mary Jane Watson's car stolen. Spider-Man fought through Puma's cronies until he confronted him in a small room, where the two briefly fought. Puma then took the fight outside on the rooftops by busting through the glass window of the room, and after fighting on three roofs, Spider-Man chased Puma to a water fountain. Their fight next brought them to a construction site, where Spider-Man chased down Puma throughout the area until they ended up in a cage, where Puma reluctantly surrendered. He gleefully told Spider-Man that he was merely a distraction so that Doctor Octopus could kidnap Mary Jane. Puma then tried to escape again, but Spider-Man finally defeated the villain by webbing him up against a girder.[1]

Seemingly those of the Puma of Earth-616

Like this? Let us know!
Retrieved from "https://marvel.fandom.com/wiki/Thomas_Fireheart_(Earth-96283)?oldid=6059876"
Community content is available under CC-BY-SA unless otherwise noted.