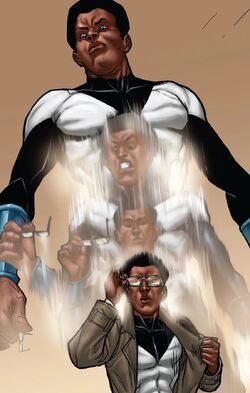 Tom Foster was the nephew of Bill Foster. Like his uncle he had a brilliant mind and attended M.I.T. (Massachusetts Institute of Technology).

After the death of his uncle Bill Foster during the Superhuman Civil War at the hands of the Cyborg Clone of Thor, a bitter Tom Foster promised to crack the Pym Particles formula and avenge him.[2]

During the World War Hulk event, Tom Foster made his way to New York City despite the majority of the population evacuating so he could see the 'heroes' fall to the Hulk.[3] He later appeared at Madison Square Garden after Hulk had defeated the Illuminati members Black Bolt, Mister Fantastic, Iron Man, and Doctor Strange. Before the matches begin, Tom gave a speech on how Iron Man and Mister Fantastic had a hand in the Cyborg Clone of Thor killing his uncle and that they will finally receive justice for their crimes.[4]

After Hulk was defeated, Tom Foster snuck into Avengers Mansion and ingested liquefied Pym Particles in their abandoned lab. He briefly assaulted Iron Man before being interrupted by the struggles of the Warbound.[5] Tom Foster was one of the heroes who offered to help in cleaning New York City.[6]

Tom Foster reappeared in Simon Williams's Revengers, a group formed to destroy the Avengers, who they thought were responsible for the recent world catastrophes. First, they attacked the New Avengers in the Avengers Mansion taking them by surprise and leaving them pummeled.[7]

Later, they attacked Avengers Tower and held a press conference, accusing the Avengers of keeping secrets and being above the law. The Avengers and the New Avengers teleported the Revengers away from the press and defeated them easily. Tom Foster was taken to the Raft, and during his interrogation he reaffirmed his hate for the Avengers because of the death of his uncle, for which he still blamed Iron Man.[8]

Later, Tom Foster had been transferred to the Cellar where he turned down Mad Thinker's offer to take part in his prison break. He turned him down and later prevented the prison break and saved the guards. His heroic actions were enough for him to earn him parole from the Cellar.[9]

Size Alteration: He deciphered the formula of Pym Particles, hence Goliath can increase his size, to a safe limit of 25 feet in height. Later, during the War of the Realms, he was able to increase his height to even greater proportions but with extreme effort.[citation needed]

Like this? Let us know!
Retrieved from "https://marvel.fandom.com/wiki/Thomas_Foster_(Earth-616)?oldid=6076913"
Community content is available under CC-BY-SA unless otherwise noted.