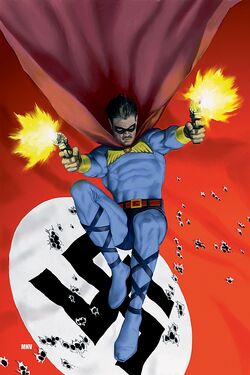 But down in those waters, I saw New York's hero community witnessing its first true call to arms. There were heroes I'd met, and some I never saw before or again. I know most of us felt tiny in comparison to the devastation around us...but we did what we could. ... This was our first true call to arms. So there was no way Namor could have won the day...regardless of the destruction he'd wrought. And the strangest part of all...was that this day of great tragedy would be the first step...to another new dawn.

The history of the Angel spans some 70 years of publications. Below is an abridged version of his history. For an his complete version see the Thomas Halloway's Expanded History

Born in the late 1870s, Thomas Halloway was the son of a prison warden; his mother died in childbirth. The warden raised Thomas in isolation, in the prison itself, and he was instructed by various experts who had taught him "everything."[3] Thomas was also taught by the prisoners, who passed on the secrets of the underworld. When Thomas discovered that one of the prisoners was about to be electrocuted he saved him. For this deed, Thomas was dubbed an "angel" by the inmate.[4]

When Thomas reached adulthood he decided to become a private detective, and also adopted the costumed identity of "The Angel" to fight crime. During an adventure in which he saved a 4,000 year old woman, he was given the magical Cape of Mercury.[5]

After the World War II, the Angel was one of a number of heroes who formed the Penance Council, the ruling body of the V-Battalion, dedicated to fighting the rise of dictatorships and other threats to the world.[6]

However, after a bystander was killed during an adventure, the Angel hung up his cape, unwilling to risk more innocent lives in his fight against crime. Still wishing to combat lawlessness and seeking a way to atone for his mistake, he eventually founded a group of trained assassins, the Scourges, who would ambush and murder costumed criminals. Eventually, these acts of vigilantism were stopped by Captain America. To escape U.S. Agent, he faked his own death.[7]

Thomas Halloway retired and lived on a sprawling estate in Los Angeles.[8]

He aged very slowly for several decades but his aging process normalized in the late 1950s or later. He was also able to cast a winged shadow to make a dramatic departures though means for that trick remain unrevealed.

The Angel had wide variety of skills in his prime. He was excellent hand-to-hand combatant and acrobat. He was also accomplished disguise artist, occult scholar and pilot. He had knowledge of many languages, some quite obscure like Greek spoken in 2060 BC.[5][4]

The Angel occasionally seemed to have superhuman strength during the 1940s, possibly linked to slowed down aging process. In the the early stages of WWII fighting Nazis in Poland, the Angel was able to jump to the top of the high building. He also leaped to catch a flying airplane and smashed his fist through its metal body.[9]

At the old age, he had to use a wheelchair.

He occasionally wore the Cape of Mercury.

He used pistols, knives and other weapons as was necessary.

The Angel was able to fly with the Cape of Mercury although he used it very rarely.

Like this? Let us know!
Retrieved from "https://marvel.fandom.com/wiki/Thomas_Halloway_(Earth-616)?oldid=6483167"
Community content is available under CC-BY-SA unless otherwise noted.