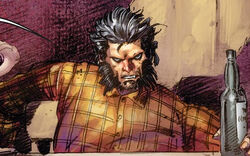 I didn't pull all this off just so you could go and get your soul torn to shreds.

Thomas Logan lived in Alberta, Canada around 1882. Thomas was the groundskeeper for the Howlett Estate, but was also an alcoholic and short-tempered. Thomas was the father of "Dog" Logan and had an affair with his employer's wife, Mrs. Elizabeth Howlett. Thomas was an abusive, alcoholic father, who beat his son and introduced the boy to alcohol, warping Dog's mind. Thomas had a violent temper, a mean disposition, and flew into uncontrollable rages.[2]

After Dog made unwanted advances towards Rose O'Hara, a red-headed Irish girl who was brought in from town to be a companion to young James Howlett (Elizabeth's second son and the result of her and Thomas' affair), James reported to his father, John Howlett Sr. In retaliation, Dog killed James' puppy, in turn leading to the expulsion of Dog and Thomas, for failing to control his son, from the estate.[3]

Afterward, Thomas, in a drunken stupor and armed with a shotgun, invaded the Howlett Estate and attempted to take Elizabeth (his former lover) with him. John, Sr. attempted to stop him and Thomas struck him in the head, killing his former employer. At that moment, James attacked the intruders with uncharacteristic ferocity, killing Thomas when the youth drove his newly manifested bone claws into his chest and scarring Dog's face with three claw marks.[3]

The activation of James' claw ability left Elizabeth in a shock stating that this happened again which pointed to the incident with her first son. She immediately cast her "monster" son out who had to leave the Howlett Estate with his friend Rose. After that Elizabeth turned to Thomas Logan's corpse taking all the blame and killing herself with his gun. James with Rose’s help then decided to flee the mansion after Dog told the police that Rose was the one who killed both John and Elizabeth Howlett.

While on the run, James later assumed the name of "Logan," in order to hide his identity.[4]

More than 100 years later, James now calling himself Logan became of the most famous superhero known as Wolverine, but one day his soul was sent to Hell by the criminal organization known as The Red Right Hand. While in Hell, Thomas met Wolverine and after telling him that he was his biological father he tried to manipulate his son into helping him rule Hell. But Wolverine saw through his lies and decided to not help him, an angry Thomas then called him a coward and told him that "He was no son of mine" to which Wolverine responded: "Damn Right" before punching him in the face and escaping from Hell.[5]

After escaping from Hell, Wolverine was tricked by Daken and the Red Right Hand into killing his own children, The Mongrels. Because of their actions, the Mongrels went to Hell after their deaths where they were welcomed by Thomas Logan who told them that "This is where all Logans go when they die".[6]

Alcoholism: Thomas Logan is an alcoholic, he drank during his work day and well into the evenings. He took out his anger on his son Dog, who he continually beat when in his inebriated state. It was the drink which led to his ultimate demise as he confronted John Howlett about his affair with Elizabeth. It was during this confrontation that he was accidentally killed by his biological son James and his emerging claws.

Like this? Let us know!
Retrieved from "https://marvel.fandom.com/wiki/Thomas_Logan_(Earth-616)?oldid=5854415"
Community content is available under CC-BY-SA unless otherwise noted.