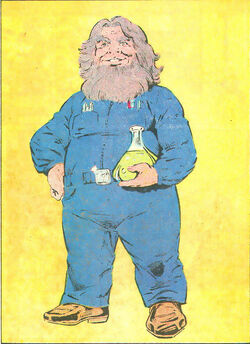 Thomas Thompson was stricken with a pituitary abnormality when he was 3 that left him a dwarf.[1] However, he was also an intellectual giant. Using his inventions, he became a crimefighter under the name Tom Thumb and a member of the Squadron Supreme.

Tom was the Squadron's chief scientist and inventor, and he designed all of the technology used to implement the Utopia Program, including the behavior modification (B-Mod) device, the hibernaculum (a hibernation tank used to place a subject into a state of suspended animation), and the Life-Watch (a device to monitor vital signs and summon a medical unit to place the wearer in a Hibernaculum in the case of death until a cure can be found).

Tom learned during his attempt to save Nuke's parents from cancer that he was dying of brain cancer himself. Tom passed away while working in his lab on another project for the betterment of humanity.[2]

Thomas Thompson was an incredibly brilliant scientific genius and inventor. He could create practically any tool or design that he could think of.

Tom Thumb possessed the normal human strength of a man of his age, height, and build who engaged in little regular exercise.

Being so short and lacking any real powers beyond his genius, Tom often felt ignored and over-looked. His best friend was an artificial intelligence that he'd created. Also, toward the end of his life, Tom developed an incurable form of cancer, which was the ultimate cause of his death,

Tom Thumb used various inventions as part of his crimefighting duties, including a force-field that was projected from his belt.

Tom Thumb utilized a variety of weapons of his own invention, including:

Tom utilized a 'Flying Chair' that was equipped with various weapons and other devices.

Like this? Let us know!
Retrieved from "https://marvel.fandom.com/wiki/Thomas_Thompson_(Earth-712)?oldid=4065629"
Community content is available under CC-BY-SA unless otherwise noted.