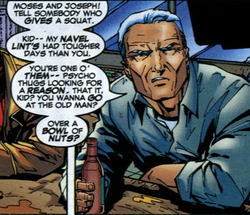 Under the influence of the Butler, Deadpool murdered him and his mother in their house in Canada via arson, without knowing they were his parents due to the mind-wipe drugs Butler constantly administered him.[1]

Like this? Let us know!
Retrieved from "https://marvel.fandom.com/wiki/Thomas_Wilson_(Earth-616)?oldid=5660322"
Community content is available under CC-BY-SA unless otherwise noted.