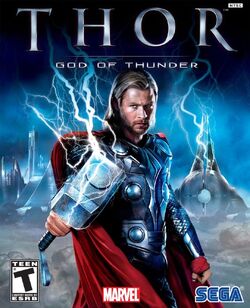 Become Thor, God of Thunder, as he battles to save his home of Asgard. Wielding the iconic Mjolnir, Thor's legendary hammer, fight across multiple Norse worlds, controlling elemental storm powers to overcome hordes of deadly foes with devastating lightning bolts, earthshaking thunder and mighty blasts of wind that can sweep away throngs of enemies.

Battle through mythological realms inhabited by classic enemies lifted from the pages of the comics, including Ulik, Ymir, and Surtur, in a clash that extends to extraordinary planets filled with Ice Titans, trolls and other mammoth opponents. Use powerful melee combos, lethal hammer throws and godlike elemental powers to take down enemies that range from large to gigantic!

Retrieved from "https://marvel.fandom.com/wiki/Thor:_God_of_Thunder_(video_game)?oldid=5471033"
Community content is available under CC-BY-SA unless otherwise noted.