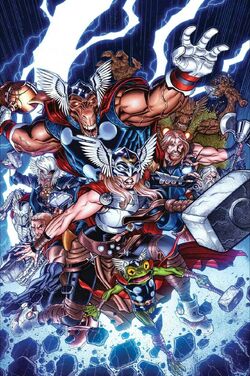 The Thor Corps were composed of multiple men and women across Battleworld and served as God Emperor Doom's police force. In order to become a member of the Thor Corps, one must be worthy to wield the power of Mjolnir during a ceremony held in one of the halls of Doomgard, the Thor Corps' base of operations. They served God Emperor Doom without question.[1]

Thunderer Thorlief was a top Thor Corps member where he was known for solving the "Mangog Murders" and had a record of arresting 13 Hulks which happened in one night.[2]

Jane Foster from a universe previous to Battleworld infiltrated their ranks after Doom killed Sheriff Strange.[3]. With the help of the Thor of Higher Avalon managed to convince the rest of the Thor Corps to rebel against Doom for making them believe in a lie.[4][5]

The Thor Corps later joined the rebellion against Doom and started to attack the Barons defending Doomstadt. The Thor Corps were likely decimated when Molecule Man transferred his power to Mister Fantastic, destroying Battleworld in the process.[6]

Various Mjolnirs and surrogates, such as Stormbreaker and Stormcaster.

Retrieved from "https://marvel.fandom.com/wiki/Thor_Corps_(Earth-15513)?oldid=5551709"
Community content is available under CC-BY-SA unless otherwise noted.