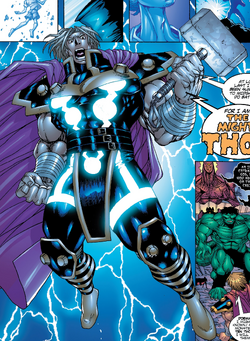 When Baron von Strucker summoned his demonic lord Dormammu to the Earthly Realm, Dr. Strange took advantage of Bruce Banner's connection to the ethereal beyond to summon Thor in response. The Thunder God quickly dispatched Dormammu's underling the Hulk before moving to do battle with the demon himself.

Whilst initially forced on the defensive by Dormammu, the Eye of Agamotto started to feed Thor power. Realising that if Dormammu fed on all of mankind's ill will, then Thor could similarly be powered by mankind's faith, Strange called for all the heroes gathered nearby to have faith in Thor's ability. With the Eye feeding their combined power to Thor, he threw Mjolnir, striking Dormammu and vanquishing the demon before vanishing himself, restoring Banner to normal.

Seemingly those of Thor Odinson (Earth-616)#Powers. This Thor can also be directly powered by the faith of those around him.

Thor is apparently vulnerable to harm within Midgard.

Like this? Let us know!
Retrieved from "https://marvel.fandom.com/wiki/Thor_Odinson_(Earth-2301)?oldid=4444511"
Community content is available under CC-BY-SA unless otherwise noted.