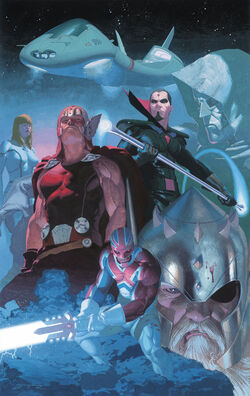 Thor is one of the members of the Thor Corps, God Emperor Doom's enforcers of justice composed of multiple men and women across Battleworld, originating from the domain of Higher Avalon.

During a ceremony held at Doomgard, another Thor from an unknown domain tried lifting Mjolnir, but failed. Thor then stepped forward and succeeded in lifting the hammer and becoming a member of the Thor Corps. Old Man Thunder then asked him to recite the story about how God Emperor Doom created the world. Thor narrated the story of how Doom created the earth and the universe, and how he raised up the Kingdoms of the Earth. Old Man Thor then explained their duty and took the younger Thor on his first mission.

One of his first missions as a Thor was to bring Baron Sinister of Bar Sinister to trial at Doomstadt, who was accused by Baron Braddock for having an alliance with King Hyperion of Utopolis in opposition to Higher Avalon. When James Braddock was sentenced to the Deadlands upon taking the blame for his brother's actions of aiding dissidents that were acting against Doom's rules, Old Man Thor and Thor of Higher Avalon were the ones who took him to the Shield in order to send him there.

Once that mission was complete, he along with Old Man Thor were tasked by Sheriff Strange to investigate an unidentified object in Utopolis. The two of them quarantined the site, but one of the Moloid diggers pressed a button which opened the object. Old Man Thor was then pierced by a spear, who warned the younger Thor to report to Strange that they had found death, before being killed by the Cabal.[1]

After reporting the incident to Sheriff Strange, the two of them went back to Utopolis and ordered the Thors stationed there to search for the Cabal. They also found the Spider-Man from Earth-1610 therein, and much to Strange's shock, he remembered the Multiverse before Battleworld.

Strange brought Miles Morales and the young Thor who discovered the Cabal's Life Raft to the Hidden Isle of Agamotto, his stronghold, where he revealed that he had found another raft like the Cabal's. Strange asked Thor to open it, and out stepped the survivors of Earth-616. As Strange explained the situation to them, Thor's hammer started glowing, meaning he was being called for battle. They returned to Utopolis and with the aid of Strange, Morales, and the heroes from Earth-616, Thor helped turn the tide of the battle in favor of the Thor Corps.[2]

After Sheriff Strange was killed by God Emperor Doom, Thor of Higher Avalon began to realize that Doom was not a real God,[3] and, led by one of the newer members of the Thor Corps, ultimately rebelled against Doom.[4]

Like this? Let us know!
Retrieved from "https://marvel.fandom.com/wiki/Thor_Odinson_(Earth-81518)?oldid=6371635"
Community content is available under CC-BY-SA unless otherwise noted.