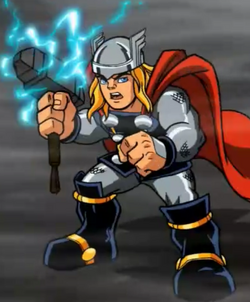 There are many heroes, only one god of thunder.

The thunder God of Viking lore, the flying, super-strong Thor uses his magical hammer to call down powerful lightning. Thor is a member of the Super Hero Squad and apparently co-leader with Iron Man.[citation needed]

The Battle with Hercules

When Zeus, Hercules' father, learned that the humans did not respect him as much due to their Asgardian counterparts, he retaliated by sending Hercules to Earth to challenge Thor to prove the Olympian's strength. Thor, meanwhile was opening a new theme park for young children in Super Hero City. Hercules arrived and promptly send Thor flying away. Thor, unfazed by the attack, asked the children to leave as it could get messy. Odin and Zeus then appeared as a sort of "spirit" before the two. Odin decided rashly that Asgard will make war with Olympus while Zeus says that Olympus will make war with Asgard. Hercules and Thor manage to settle down their fathers and they compromise by settling their feud with set of challenges between Hercules and Thor.[citation needed]

Loki revealed himself to be the mastermind behind the entire affair and was pleased that Zeus and Odin were wearing the caps that he had given them. With a click, Zeus and Odin were forced to obey Loki. Loki commanded the two to attack Hercules, Thor, and Reptil. Thor told Hercules and Reptil to hold off their fathers while he took on Loki. When the battle started to look grim, the Super Hero Squad arrived to assist them. Eventually, Loki was defeated and Zeus and Odin were quick to continue the challenges. Thor refused, stating and that it was a draw. The fathers accepted the outcome and everyone celebrated.[citation needed]

Seemingly those of Thor Odinson (Earth-616)#Powers.

Seemingly those of Thor Odinson (Earth-616)#Abilities.

Like this? Let us know!
Retrieved from "https://marvel.fandom.com/wiki/Thor_Odinson_(Earth-91119)?oldid=6466118"
Community content is available under CC-BY-SA unless otherwise noted.