1. "The Devourer King - Part One: The Black Winter"

I did not happen upon Asgard. I did not come here for asylum... if you are to be my end, Thunder God... then we will kill the Black Winter together. And when we are done... I would have you close. So that I may have words with thee. Until then... rise... Herald of Thunder!

Appearing in "The Devourer King - Part One: The Black Winter"

Synopsis for "The Devourer King - Part One: The Black Winter"

Racing across all of the Ten Realms, Mjolnir carries a message from the new All-Father of Asgard that there is to be peace following the War of the Realms and that he will personally smite anyone who breaks this decree. In Manhattan, the Avengers battle a giant monster whose head is obliterated by Mjolnir, which imbeds itself in the ground at Captain America's feet. Landing next to the divine hammer and retracting his helmet, Iron Man mischievously smirks and asks if anyone has a sharpie.

Standing on the Bifrost, Thor holds out his hand to recall Mjolnir, Hugin and Munin perched on his shoulders. Thor smugly asks Sif - now the all-seeing wielder of Hofund - if she saw that, Sif replying that she sees everything; and as Thor asks if she can point him in the direction of any trouble that needs resolving she gently reprimands him to attend to his duties as the King of Asgard. Catching Mjolnir and seeing a message from Iron Man teasingly telling him to enjoy his retirement, Thor begrudgingly agrees. Sif asks why he is so dour, pointing out that inheriting the throne is something he's wanted since he was a child, but Thor lamentingly replies that now that he has what he thought he'd wanted he misses what he'd had, asking what a king is compared to a god.

Arriving at Asgard's throne room, which has been remade to suit his image, Thor dons a tunic, ram-horned helmet, and regal robe, sitting on a throne carved from Yggdrasill itself. Dropping Mjolnir with a heavy thud, Thor commands his courtiers to leave, Volstagg approaching the throne and asking to go over some of the details regarding his upcoming speech - namely how much ale will be required. Tired and irritable, Thor simply glares at him; Volstagg ushering everyone out of the room and quietly telling the party planner to err on the side of too much ale. As Thor lets out a lamenting sigh, Loki appears from the shadows and mockingly asks how it feels to sit on their father's throne. Thor snaps that he wouldn't know since he's only ever sat on his own, Loki trying to get under his foster brother's skin by asking if he's ready for his upcoming speech.

Thor angrily commands Loki to bow before him, the new King of the Frost Giants begrudgingly doing so. Lifting Mjolnir with some difficulty, Thor tells Loki to get out and never return unless invited, threatening to feed him to Hugin and Munin. Noticing Thor's grunt of effort, Loki's furious glare turns to a look of concern and he asks Thor if Mjolnir is getting heavier. As Loki continues to probe, Thor furiously hurls the divine hammer at Loki's head and stops it in midair just before it hits him. Cowering, Loki asks how Thor did that, and Thor snaps that he is the All-Father and has the power that comes with the title; taking Mjolnir as he tells Loki he would do well to remember that.

Stepping out onto a balcony overlooking the Golden City of Asgard, Thor tries to ignore Mjolnir growing heavier in his grasp and prepares to deliver a speech to his subjects, one he's rehearsed countless times to his own reflection and Mjolnir. Before he can do so, the temperature suddenly drops and snow begins falling. Galactus - badly wounded and covered in black frost - plummets from the sky and crash-lands in the middle of Asgard. Enraged by this apparent attack on his kingdom - and secretly delighted to have the excuse to cast aside the mantle of king - Thor lunges at the Devourer of Worlds and blasts him with a massive bolt of divine lightning. As Thor prepares to finish him off, Galactus protests that he came for help, stating that the Black Winter is coming before falling unconscious.

A few months later, Asgard has been rebuilt from the devastation wrought by Galactus' fall, a storm of mourning sweeping across the realm. Volstaag is the first to notice that Yggdrasil has been infected by the dark ice that had afflicted Galactus, causing it to begin to wither and rot. Convening a council of the Heralds of Galactus, Thor demands to know what the "Black Winter" their master mentioned is. Phasing through a wall, the Silver Surfer - now intangible and stained black by his battle with an ancient god of darkness - replies that it is the end of everything. Shocked by the Surfer's altered appearance, Thor asks what happened to him, but the Surfer replies that time is of the essence. Turning to the other Heralds, he asks how much they know about Galactus' origins.

The Rider replies that Galactus was the last survivor of the Sixth Cosmos, which was destroyed by an unknown cataclysm, but the Surfer interrupts and states that the Black Winter is what destroyed Galactus' home universe. Thor asks how they can stop it, but the Surfer tells him that they cannot, and that the Black Winter does to whole universes what Galactus does to planets. The Surfer states that Galactus is the only one who can stop the Black Winter - having survived it twice - but that first he needs to consume the energy of five special planets, the location of which he learned a long time ago but kept hidden from his master. As Nova laments the prospect of Galactus being more powerful than ever, Stardust asks which of the Heralds will accompany him. The Surfer says he will be the one to go, Thor standing as he says that he will join him.

Later, Thor dresses for battle, angrily recalling Sif and Loki telling him that his fighting days are over. Wiping Iron Man's mocking message from Mjolnir, Thor grimly states that Odin is no longer the king of Asgard, and that this is how the new king does things. Flanked by the Heralds of Galactus and accompanied by an army of Asgardians, Thor marches to where Galactus has been convalescing from his injuries. As Galactus stands, Thor commands him to kneel; the Surfer saying that he can feel his former master inside his mind, asking if he knows of their plan. Genuflecting before Thor, Galactus replies that he does and begrudgingly commends the Surfer for keeping the location of the five planets hidden for so long. The Surfer informs Galactus that Thor and his army will be accompanying them to evacuate the populaces of the five planets before he feeds, asking if Galactus is ready to begin.

Standing, Galactus says that he is not, telling the assembled crowd that just as he appears differently to every being that perceives him, so too does the Black Winter - which manifests as the thing that will bring about the fated deaths of those that look upon it. The first time he witnessed it, he saw nothing but an eldritch void unfathomable to the mortal mind; but that the second time he faced it as a cosmic entity, he saw the embodiment of his true death. Raising his hand, Galactus declares that the one prophesied by the Black Winter to destroy him is none other than Thor Odinson, blasting the King of Asgard with a torrent of the Power Cosmic. As the Surfer and Volstagg scream in horror, thinking Galactus is trying to kill the King of Asgard, Galactus states that he didn't just happen upon Asgard after being maimed by the Black Winter, but came there deliberately intending to defy his destiny. Stating that if Thor is fated to be his death he intends to keep his enemies close, Galactus commands his newest Herald to rise. Imbued with and transformed by the Power Cosmic - burning off his beard, causing his hair to turn platinum blond and grow in length, and restoring his missing arm and eye - Thor rises as the Herald of Thunder.

A BRAND-NEW, SUPERSTAR CREATIVE TEAM TAKES THE KING OF ASGARD TO NEW REALMS OF GLORY!

The prince is now a king. All Asgard lies before Thor, the God of Thunder. And after many months of war, the Ten Realms are finally at peace. But the skies above the Realm Eternal are never clear for long. The Black Winter is coming. And the God of the Storm will be powerless before it. 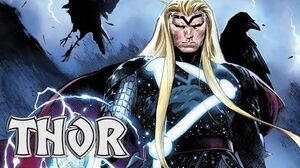