View source
watch 02:56
Doctor Strange in The Multiverse o Madness - The Loop
Do you like this video?
Play Sound
Part of the Prey arc

Doctor. My name is Doctor Donald Blake. I am not him. Not your new king. Your new golden bird... and I will never be a refuge for a god again... From now on, none of them will have a place to hide... from me. No... I am no Thor... and I never will be again.

Appearing in "Prey: Part One of Six"

Synopsis for "Prey: Part One of Six"

THE RETURN OF DONALD BLAKE!

The “Prey” arc starts here! Once upon a time, a mortal man bore within him the spirit of a god. With a crack of his cane upon the ground, the Mighty Thor would appear! But it’s been years since the King of Asgard required his human ward. Where has the good doctor been all this time – and what does his reappearance mean for the God of Thunder? Donny Cates and Nic Klein journey into a mystery left unsolved since 1962! 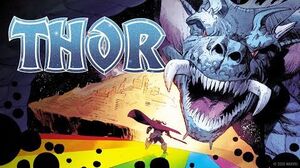