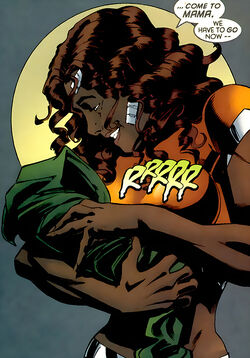 The child of Threnody and an unknown father. They were born in the sewer tunnels under New York. After Threnody broke up with Nate (who is apparently not the father), she took the child and disappeared.[1][2] Threnody's powers affected the baby, resulting in it becoming an undead demonic creature.[3] In order to nourish the child, Threnody required to regularly transfer to her baby the necroplasmic energies she was capable of absorbing. To this end, she joined the Assassins Guild.[4]

When the Assassins Guild clashed with the mercenary Deadpool, Threnody was sent with Blackout to take him down. However, she stopped Blackout from killing Deadpool, and left the Guild to partner with him and use their adventures as a new source of death energy for her child.[5] When Deadpool took down the Assassins Guild, he left his handler Weasel and his pregnant wife Clarice with Threnody. After Weasel was killed by Assassins Guild mercenaries, Threnody kidnapped Clarice,[4] with the intention to absorb her unborn baby's energy. She hoped that the energy of Clarice's baby would be enough cure her baby's affliction. Deadpool tried to make Melody come to her senses to no avail, so he impaled Threnody's baby to stop her. Threnody initially retaliated against Deadpool until he made Melody realize he wanted to spare her from the guilt of murdering a child. She then left him with the warning to stay away from her.[3]

Like this? Let us know!
Retrieved from "https://marvel.fandom.com/wiki/Threnody%27s_Child_(Earth-616)?oldid=5162891"
Community content is available under CC-BY-SA unless otherwise noted.