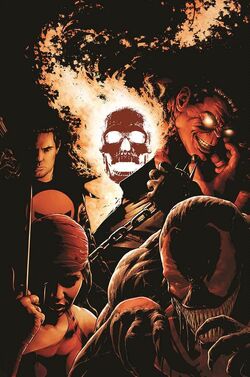 In the aftermath of the Phoenix War, Thunderbolt Ross, a.k.a. the Red Hulk, assembled a strike-team with a composition very similar to the defunct Code Red, including himself, the Punisher, Deadpool, Elektra, Agent Venom, and others. He gathered these anti-heroes in order to fight an infection of targets under the ethos that if they cannot be cured, then they had to be "cut out". A new team of Thunderbolts, modeled after Wolverine's X-Force, ready to do bad things for a good purpose.[2]

Like this? Let us know!
Retrieved from "https://marvel.fandom.com/wiki/Thunderbolts_(Red_Hulk)_(Earth-616)?oldid=6313889"
Community content is available under CC-BY-SA unless otherwise noted.