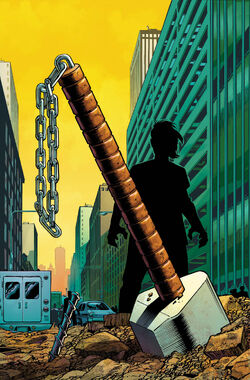 Gallery
Official Name
Thunderstrike
Owners
Current owner(s)
Kevin Masterson
Previous owner(s)
Eric Masterson
Physical Characteristics
Type(s)
Magical Hammer
Version
Made as a sort of duplicate version of the enchanted hammer Mjolnir. This is the same thing that Odin did when he made Stormbreaker for Beta Ray Bill, and for Red Norvell when he made the un-named hammer for him, as a replacement for the original Mjolnir.
Origin
Origin
The mace was created by Odin for Eric Masterson, to replace Mjolnir as his weapon, when the real Thor returned, Magical, Asgardian
Reality
Earth-616
Place of Creation
Nidavellir
Creators and Appearances
Creators
Tom DeFalco, Ron Frenz
First Appearance
Thor #459
(February, 1993)

--Inscription on the mace Thunderstrike

The mace replaced the hammer Mjolnir as Eric Masterson's weapon.

The Enchanted mace Thunderstrike is very similar to Mjolnir, it is also made of mystic uru metal and is nearly indestructible,

Like this? Let us know!
Retrieved from "https://marvel.fandom.com/wiki/Thunderstrike_(Item)?oldid=6436669"
Community content is available under CC-BY-SA unless otherwise noted.