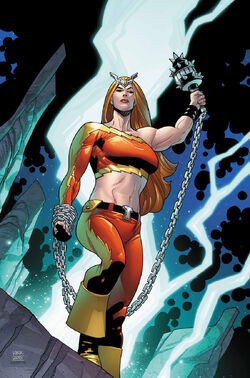 Quail, Elephant Man. before the might of THUNDRA! ... There exists a man who doesn't know my name to quail at it? We can't have that! There must be quailing! Serious quailing!

Toward the end of the twentieth century in one alternate timeline, worldwide chemical and biological warfare broke out, resulting in the sterilization of 95% of the Earth's female population. The fertile 5% seized political power and began a systematized program of oppression against men, who were seen as having nearly exterminated the species. By the early 23rd century, natural childbirth was totally supplanted by laboratory birthing, and men were bred only as servants, entertainers, and breeding stock. The major concerns of the United Sisterhood Republic, one of the leading nations of the new world, were exterminating the renegade bands of roving free men and preventing incursions from foreign nations and powers.[citation needed]

Thundra was born in the Central Birthing Center of Greater Miago (Milwaukee-Chicago), a government-run laboratory where fetuses are brought to term in artificial wombs. Genetically engineered for strength and endurance, Thundra was sent to military school when she was eight years old. By the age of eighteen, she had distinguished herself as the finest warrior in the Midwestern Republic and became an officer in the militia. She led assaults against roving bands of renegades and the armies of the Central American Empire.[citation needed]

In the middle of Thundra's military career, the USSR faced an invasion from soldiers from another alternate timeline, a world known as Machus. Men from this alternate Earth had managed to overthrow their female oppressors generations previously, and used their technology for inter-dimensional travel to journey to Thundra's Earth to liberate the men of that world. In an attempt to strike back at the men of Machus, Thundra stole their dimensional apparatus, planning to launch a counter-attack on their world. The machine malfunctioned, however, and displaced her through time as well as space. She arrived in the twentieth century, and after acclimating herself, decided to humble the strongest man on Earth, thereby, she believed, preventing the world of Machus from ever coming about.[citation needed]

Upon her arrival, she was befriended by the criminal Wizard of the Frightful Four, whose instruments detected Thundra's time displacement. The Wizard was looking for a replacement for Medusa, and saw Thundra as an ideal choice. Thundra pretended to go along with the Wizard's plans in order to exploit his resources. She determined that the Thing of the Fantastic Four would be the ideal object lesson to vanquish in battle. Alongside the Frightful Four, she engaged the Thing in a battle, besting him fairly on at least one occasion. Recognizing that her actions in the past would have little bearing on the future, she betrayed the Frightful Four to become an ally of the Fantastic Four.[2]

Thundra tried to help the Thing when he was mind switched with the Hulk but was knocked out in the process, however when she awoke she returned the blow that the "Thing" delivered to her earlier before walking off.[3]

Thundra came to the rescue again when the FF battled the Frightful Four again.[4] She then helped the team in a conflict against Namor.[5]

Mahkizmo, the greatest warrior of Machus, eventually trailed Thundra to the twentieth century and took her back to her own time to stand trial for her theft of the interdimensional travel equipment. The Fantastic Four followed Thundra (using their own means of travel) and helped Thundra battle against the dimensional invaders of Machus.[6] Before leaving the future for their own time, the Fantastic Four destroyed the mind-domination equipment of Machus and hoped that the two worlds would settle their differences amicably. Thundra returned to the twentieth century with them, believing that her world would be changed unfavorably by the presence of the extradimensional men.[7]

When the Frightful Four were looking for a fourth member via an ad in the Daily Bugle, Thundra showed up to fight them, but was electrocuted by the Trapster.[8]

She helped the FF battle Brute from Counter-Earth who had teamed up with the Frightful Four to fight the FF.[9] Thundra also worked with the team regarding defeating Eliminator.[10]

Months later, however, Thundra was contacted by the Nth Command, subsidiary of the Roxxon Oil Company devoted to extradimensional research. They told her that a divergent future world existed which was never invaded by Machus. She agreed to carry out a mission for them in exchange for being restored to her world. The mission was leading a band of female Roxxon operatives called the Grapplers into the government energy facility Project: Pegasus in order to sabotage it. She was apprehended in the process but was released so the authorities could track down the party that sent her. She briefly became an ally of Hyperion of the Squadron Sinister, another Roxxon operative.[citation needed]

When she learned of the Nth Command's sinister motives, she stole one of the Nth Projectors, dimensional aperture synthesizers. Creating a portal to her own time, she went through it after bidding a fond farewell to the Thing, the twentieth-century male she had most learned to admire. Hyperion attempted to follow her, but the portal closed while he was halfway through, stranding him in limbo. Thundra arrived in her home reality safely.[citation needed]

Thundra became the ruler of this alternate future Femizonia, renamed the United Sisterhood Empire. Later, as her people wanted her to establish a dynasty, Thundra decided that, since the Thing was the only male she respected, he should marry her. An emergency prompted her to call the Thing to her dimension, and once the crisis was averted, she took the opportunity to propose. Because acceptance meant that the Thing would be forever unable to return to his time, he declined. As a favor, Thundra first returned the Thing to an alternate timeline where he could propose to his long-time love, Alicia. Instead, however, the Thing left Alicia at the altar and Thundra soon returned the Thing to his own timeline.[citation needed]

Thundra eventually found herself at war with the extradimensional kingdom Polemachus and its chauvinistic warrior monarch, Arkon. Towards the end of their long, bitter conflict, Thundra employed the hero teams Avengers and Fantastic Four as pawns in her war with Arkon. However, the heroes helped Thundra and Arkon discover that they shared a strong mutual attraction, an attraction that ended their conflict when they became lovers. Thundra has since joined Arkon in Polemachus as his consort.[citation needed]

Arkon also had a rival in his Grand Vizier, who, over time, convinced Arkon to return Polemachus to a more barbaric lifestyle rather than rely on its science. The Grand Vizier then abducted the superhero and Avenger Photon along with the super-villains battling her at the time, the Wrecking Crew. The Grand Vizier used the Wrecking Crew to depose of Arkon and Thundra, until the Avengers arrived to rescue their teammate and restore Arkon to the throne. Polemachus returned to its hybrid barbaric/scientific lifestyles.[citation needed]

Thundra, Invisible Woman and Valkyrie teamed up with She-Hulk and her Skrull partner Jazinda (masquerading as a Shi'ar) in order to forcibly distribute stagnating aid in the corrupt country of Marinmer.[11]

Superhuman Condition: Thundra possesses a number of powers that are the result of genetic engineering such as:

Skilled Combatant: Thundra has been extensively trained in boxing, wrestling, and the military arts of her century. She is experienced in the use of the broadsword. Thundra is a seasoned combat veteran of many anti-renegade raids. She had little experience with fire-arms because of their virtual elimination in her own time.[12]

Thundra commonly uses a chain as a weapon.[12]

Like this? Let us know!
Retrieved from "https://marvel.fandom.com/wiki/Thundra_(Earth-715)?oldid=6001941"
Community content is available under CC-BY-SA unless otherwise noted.