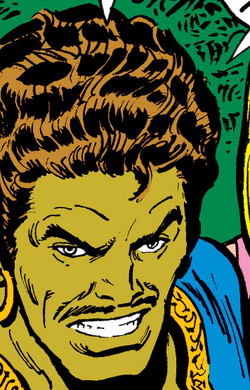 Thutmekri was a Stygian who journeyed to the ancient black kingdom of Zembabwei, stole a graven golden image of their great gorilla god and then fled north, across the sprawling Iranistani desert till he crossed the nearby Ilbars River. Along the way, he purchased the gold-dressed slave girl named Helgi, to keep him warm in climates increasingly cool. He met Conan in a verdant rain forest, slayed the lakhmu which was threatening him, but, citing his disdain for barbarians, declined to help him get out a quicksand. A while later, Thutmekri was then found by Conan tied to a tree, victim of his enemy Dalboor, who was hunting him to recover the stolen idol.[1]

Like this? Let us know!
Retrieved from "https://marvel.fandom.com/wiki/Thutmekri_(Earth-616)?oldid=5242307"
Community content is available under CC-BY-SA unless otherwise noted.