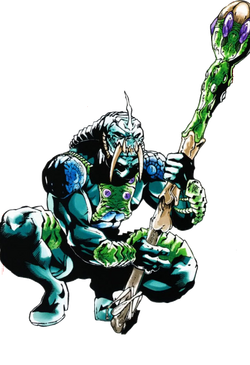 Intergalactic holding company Landau, Luckman and Lake' prognosticators foretold a prophecy involving a celestial messiah S'Met'Kth, his herald the Mithras and Tiamat. LL&L believed the messiah would usher in a new age of galactic prosperity if he were not killed by Tiamat. The Mithras's role was to save the messiah from Tiamat. A few members of LL&L manipulated events in Deadpool's life to force him to play the role of Mithras and fulfill the prophecy.[1]

Eventually it was discovered the celestial messiah was an ancient monster who was bringing peace and bliss to the universe but in doing so was eliminating free will. This meant Tiamat was in the right and LL&L were wrong. Deadpool and Tiamat merged to defeat the messiah with Deadpool's mind controlling the gestalt being. After the messiah was destroyed Tiamat slinked away angry that his purpose in life had been usurped by Deadpool. [2]

Like this? Let us know!
Retrieved from "https://marvel.fandom.com/wiki/Tiamat_(Champion)_(Earth-616)?oldid=6477852"
Community content is available under CC-BY-SA unless otherwise noted.