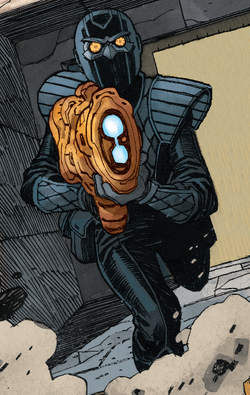 Someday, someone will write a book about me. And that book, it will be almost as amazing as me. Almost.

Tilda Johnson was born into poverty, the only child of a family living in the Harlem district of New York City. At an early age, she discovered that she was gifted with a natural aptitude for science, and she chose to develop it in secret, hiding a brilliant mind behind a facade of childish behavior. By the time she was sixteen, Johnson had accumulated an extensive knowledge of genetics, cybernetics, and physics, and using her knowledge she began a career of crime, believing that this would be her fastest and most lucrative way out of the ghetto.[4]

By the time she was 18, Johnson's activities as a budding young criminal mastermind brought her to the attention of the villainous Plan Chu a.k.a. Yellow Claw, who was at the time looking for allies. Johnson and the Yellow Claw developed a costumed identity for her as "Deadly Nightshade," and the Yellow Claw helped finance her first large-scale criminal venture. Nightshade's plan was to utilize prisons as a source of manpower for the Yellow Claw through the use of chemicals which would transform convicts into obedient werewolf-like creatures. The plan was foiled by the hero Captain America and the espionage agency S.H.I.E.L.D., but Nightshade herself managed to escape.[5]

Because of her failure, the Yellow Claw rejected Nightshade as an ally. In her anger, Nightshade formulated plans to avenge herself on Captain America and SHIELD. Using special pheromones to enhance her natural allure, she actually took control of a SHIELD facility for a brief time, and forced Captain America to fight his partner, the Falcon. This time, when her plan ultimately failed, Nightshade was captured.[6]

Nightshade escaped from prison and returned to Harlem, where she turned her scientific talents toward the creation of life-like robots to serve her in an effort to take control of the criminal underworld. Once again she hid behind a childlike facade, this time as the "mistress" of rising crime-lord "R.U. Rossum" (who was actually one of her robots). Nightshade succeeded in wrestling the protection rackets from local gangs and the organized crime Maggia families, and began to look for further criminal operations to take over. The heroes Power Man and Iron Fist, however, exposed her scheme and destroyed her base of operations.[7]

She managed to escape, however, and remained undercover for several months. She surfaced with a scheme to recruit the monstrous Hulk as an accomplice to help her acquire a unique piece of circuitry developed by the Rand-Meachum Company, which could override the access codes of any computer system. She was opposed by Power Man, Iron Fist, and the robot Machine Man and was soon apprehended end imprisoned. After serving a short sentence, she was paroled and conceived a hasty plan to acquire funds for future operations. She assembled four accomplices, Stiletto, Discus, Man-Mountain Marko, and the second Eel, and went to a debutante ball to rob its wealthy guests of their valuables. Power Man and Iron Fist again thwarted her plans and apprehended Nightshade and her four accomplices.[8]

Nightshade lent her scientist expertise to Superia as a member of her Femizons.[9] Later, her experience with werewolf serums provided useful to Dredmund the Demon Druid. She helped him create a small army of werewolves, and even temporarily transformed Captain America into a werewolf.[10]

Tilda tried to start her life over without crime after her experiences with Black Panther. Despite her skill and intelligence, the only medical job she was able to get was as a receptionist as she was self-taught and, as such, had no official degrees. She was promptly fired after pointing out a mistaken diagnosis by one of the doctors as well as the hospital realising she had concealed her criminal record.[3]

She contemplated suicide, until M.O.D.O.K. contacted her and hired her for a heist. She agreed since she used up all her second chances and joined MODOK's 11.[15]

During Daredevil's reign over The Hand, Nightshade organized Flashmob (a group of former Luke Cage enemies). They fought and were defeated by the new Power Man, Victor Alvarez.[16]

Nightshade joined Misty Knight's Crew along with Tiger Shark, Bombshell, and Crossfire. The team was set up to defeat Purple Man and his Villains for Hire.[17] When the two teams battled, Misty discovered most of her team abandoned her when they were offered more money to join Purple Man.[18]

Following that brief stint, Tilda found herself hitting rock bottom in her criminal career. When held at gunpoint by a group of thugs, Tilda realized she had wasted her potential, and swore to turn her life around if she survived. She was miraculously saved by the vigilante Nighthawk, who required of Johnson's expertise with electronics. He threatened Tilda to have her join him, but she gladly and voluntarily accepted.[1] From then on, Tilda acted as Raymond's mission control and created his equipment. She moved to his base in Chicago, helping him clean the city and battle injustice faced by African Americans.[19]

Tilda was later contacted by the former Avenger Hawkeye to help him investigate the origin of a sample of Epidurium he and his partner Red Wolf had found being trafficked illegally. Their investigation took them to an abandoned S.H.I.E.L.D. base located in a coal mine which was being guarded by decades-old Life-Model Decoys.[20] After helping protect the base from returned unidentified assailants, it was determined the LMDs had been woken up by the break-in when the Epidurium was originally stolen. Furthermore, that base hadn't been the only one robbed.

After reporting the incident to S.H.I.E.L.D., Tilda decided to join Hawkeye and Red Wolf in their road trip of vigilantism, leaving Nighthawk's side in good terms with him.[1]

After Steve Rogers revealed himself to be a Hydra sleeper agent and established a Hydra Empire, Raymond was killed in civilian clothes for being an African-American protesting the new regime and, to honor the legacy of the man who saved her life, Tilda took his suit and carried on the mantle of the Nighthawk in the Underground.[21]

Months after the fall of the regime, Tilda was seen without her Nighthawk suit at the Bar with No Name, alongside Conan, Juggernaut, and several other patrons.[22]

Super-Genius Intelligence: Tilda Johnson is considered to be one of the smartest people on the planet. She is a brilliant scientist, and has constructed a number of formidable weapons and devices to aid her in her criminal activities. With the Yellow Claw's help, she once developed a chemical which allowed her to control a man's mind and influence his perceptions, but her supply of that chemical has long since exhausted.[4]

Trained Combatant: Nightshade is also an above-average athlete, and is extensively trained in martial arts and acrobatics.[23]

Like this? Let us know!
Retrieved from "https://marvel.fandom.com/wiki/Tilda_Johnson_(Earth-616)?oldid=6188544"
Community content is available under CC-BY-SA unless otherwise noted.