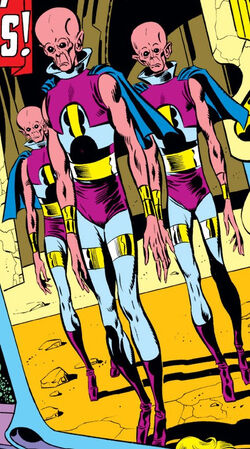 The Time Twisters were a trio of beings created by the last director of the Time Variance Authority in the last surviving reality before the heat death of that universe. The plan was for the beings to survive the end and travel into the next universal cycle with knowledge of the past to improve the future. However, the Time Twisters were born flawed and instead began to travel backwards through time to reach the beginning.[2][3]

The Time Twisters spiraled back through time, interacting with planet Earth every 3000 years, and every time they did, they left the planet destroyed as they continued their way backwards. The destruction of Earth in the 80th century was observed by Zarrko the Tomorrow Man. In order to prevent the destruction of the planet in the 50th century, Zarrko traveled back to the 20th century and recruited Thor, Jane Foster, and the Warriors Three to help stop the Twisters.[4][note 1]

The Twisters arrived in the 50th Century and easily defeated Zarrko's assembled army by altering their life cycles to age and de-age them. Thor attempted to reason with the Twisters, but they believed that their arrival in a world made it better rather than destroying it, believing that the sacrifice of millions of worlds was worth the knowledge they would obtain. Thor attempted to attack them, but they were protected by an energy field that not even Mjolnir could penetrate. The Twisters then summoned an army of warriors from multiple periods to attack the Asgardians and during the battle, they left, destroying the Earth.[5]

With no other alternatives, Thor and Zarkko traveled to the end of all realities to meet the Time Twisters' creator. Once there, they found him looking after their birthing pods and tried to convince him of the Twisters' destructive nature. Despite not being convinced at first, he realized the danger of his creator and terminated the Time Twisters before they hatched.[2]

At some point, the Twisters became dominant and worked with Immortus by disguising themselves as the Keepers (who had recruited Immortus) to destroy a multitude of alternate realities. They used him as a receptacle for the excess energy building up inside Earth-616's Nexus Being, the Scarlet Witch.[6]

The Keepers discovered four alternate realities, each with their own Nexus Being, which could diminish the power of the Twisters. The first reality was home to the Fantastic Five and they recruited Doctor Doom to kill the Nexus Being, Franklin Richards. Immortus however began to work against the Twisters by taking on the identity of the Whisperer and was able to turn Doctor Doom against the Keepers and save Franklin.[7]. They next tried to destroy the Vision of Earth-90110, and were ultimately successful and Immortus recruited Iron Droid against them.[8] They then tried to kill Jean Grey of Earth-9250, where Wolverine was the Lord of Vampires. They were again stopped by the Whisperer's interference and one of the Twisters faded from existence.[9] During their final attempt on a Nexus Being, Odin of Earth-9260, the final one faded away when their attempt was ultimately stopped.[10]

Immortus, now freed, became a temporal wave, and the "Immortus Wave" set about traveling the multiverse to remake it with himself as the ruler.[10] After he was defeated by the Watcher and the TVA, the Twisters reformed, but the real Time-Keepers arrived and revealed the origins of their creation and the deception of the Twisters. The Twisters returned to their birthing cocoons and the Keepers returned them to their Citadel at the End of Time and vowed to watch over the Twisters and ensure they would never hatch again.[3]

Able to travel through and manipulate time. Vast control over energy

Like this? Let us know!
Retrieved from "https://marvel.fandom.com/wiki/Time-Twisters?oldid=7040496"
Community content is available under CC-BY-SA unless otherwise noted.