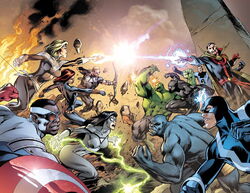 Eight months have passed since Captain America declared Iron Man and the Illuminati enemies of the Avengers and started hunting them down. The Avengers have fallen under S.H.I.E.L.D.'s authority, some members left after this event, and joined Sunspot's own Avengers in order to help him and A.I.M., which Sunspot bought, to work on a solution for the incursions.[2] The Illuminati have gone into hiding, and Iron Man has disappeared, unknown to everyone that he had been captured by the Cabal.[3] Namor's Cabal is becoming more and more uncontrollable, and they have destroyed numerous alternate Earths to save this reality's, having taken over Wakanda and the Necropolis. Doctor Doom started working on the incursions as well, with the Mad Thinker managing to map the entire network of the Mapmakers to find what started the decay of the Multiverse, and planning to use the Molecule Man to navigate said map.[4]

Using A.I.M.'s resources, Sunspot managed to put into operation a machine capable of transporting individuals across the Multiverse, in hopes of finding the source of the decay of the Multiverse.[5] The Avengers embarked in this mission encountered the Black Priests and discoverd they were trying to save the Multiverse. The Black Priests, now led by Doctor Strange, offered to help the Avengers face those causing the destruction of the Multiverse, the Ivory Kings and Rabum Alal. In order to get to the Ivory King, it was needed to get hold of one of their Mapmakers, and in order to get to Rabum Alal, it was needed to get hold of one of his Black Swans. The Avengers would go get one of them, while the Black Priests tried to get the other.[6]

Back on Earth, the Illuminati let Steve Rogers and S.H.I.E.L.D. find them in Spain and engaged them in combat. But this course of action was merely a trap, as Sunspot's Avengers appeared before S.H.I.E.L.D., ordering them to surrender.[7]

As a response to the appearance of Sunspot, who failed to convince Steve to put aside their differences for the common threat that incursions were, and his Avengers, Rogers deployed the lobotomized Hulk from an alternate dimension. Steve Rogers arrived to the battle field, where he confronted the Illuminati, and deployed the Mighty Avengers. The Mighty Avengers and the Avengers engage the Illuminati and Sunspot's Avengers in combat. When Rogers was ready to confront Reed Richards, he was surprised by the revelation that Sue Storm was working for the Illuminati. The Invisible Woman trapped everyone in force cages. After descending in an aircraft, Sue also revealed Medusa, Black Bolt and Namor accompanying them.[8]

Requesting an opportunity to talk, the Illuminai revealed they had a plan to deal with the Cabal. Namor admitted his guilt for the destruction he had caused, and was willing to set a trap for the Cabal. A new incursion was on the horizon, one in which the incursive world had been ravaged by the Sidera Maris. Namor would lead the Cabal to said world, activate the antimatter injector without their knowledge, and leave them to die with said Earth, preventing them from escaping with the use of an A.I.M. platform capable of creating an impenetrable barrier between the two colliding Earths. However, as Namor had left the incursive Earth and prepared to activate the platform, Black Panther and Black Bolt appeared before him. They incapacitated Namor and threw him off the platform to the soon-to-be-destroyed Earth in order to make him personally pay for his crimes.[9] As the incursive Earth was about to be destroyed, the Cabal discovered a strange event was happening, the Earth they were in was taking part of another incursion in addition to the one against Earth-616. Namor and the Cabal made their way to the second incursion point and travelled to the other universe, the Ultimate Universe, where they were found by the the Maker.[9] Unaware of the Cabal's survival, T'Challa and Blackagar returned to their universe, informing the Avengers that not only the Cabal had supposedly been destroyed, Namor was also not going to come back.[10]

Back in Necropolis, the Illuminati freed Tony Stark from his cell, and let him go to prevent old fires from being stroke when they met both S.H.I.E.L.D.'s and Sunspot's Avengers.[11] Once the Illuminati met with the other two Avengers teams, Reed informed them that something had caused an acceleration of the Multiverse's decay, and from hundreds of thousands only less than two dozens of universes remained. This change had caused a halt in the incursions, with only one incursion left for Earth-616 to face. When Rogers confronted them about their apparent inaction to find a solution, the Illuminati revealed to him that over the past eight months, while on the run, they had tried to find a way to create a new planet where to relocate Earth's inhabitants while destroying the Earth in order to stop the incursions on this universe. However, all of their attempts had failed. During their discussion, Reed was interrupted by the upcoming transmission of Yellowjacket, who had went eight months ago in a journey across the Multiverse to find the origin of the incursions, having found the Ivory Kings, who were revealed to be the Beyonders.[12]

Meanwhile, the Molecule Man took Doom elsewhere,[6] a blank void from where they subsequently traveled backwards through the mists of time and the various planes of reality.[12]

Over the past eight months, Yellowjacket had tried to find Rabum Alal. He came across a Superflow were the surviving Builders from numerous universes were working together to find the Ivory Kings. When they finally intercepted them, the Beyonders were found annihilating the Celestials of every universe at the same time, and then proceeding to kill the cosmic entities of every universe. When Eternity finally fractured, the Living Tribunal took form, but was destroyed, landing on every reality, one sliver of itself for each universe.[13]

Inspired by Val Richards, the Illuminati stopped working on a way to stop the incursions, as they "couldn't win," but started planning the creation of a "lifeboat" to survive the destruction of the universe, in order "not to lose." Meanwhile, the Shi'ar empire discovered the link between the decay of the Multiverse and the Earth, for which they decided that if the universe was to live, the Earth must be destroyed. Even though they planned a sneak attack on the Earth, the Guardians of the Galaxy managed to discover the Shi'ar's plan and warned the Avengers.[14]

Meanwhile, the Black Priests and Sunspot's Avengers continued their journey to find Rabum Alal and the Ivory Kings. After encountering a universe with access to the Library of Worlds the Black Swans inhabited, a group of Black Priests engaged the Black Swans guarding the entrance and entered the Library. However, the Black Swans manage to ambush and destroy the Black Priests, with the exception of Doctor Strange. When defeated, Doctor Strange was taken to Rabum Alal, who was revealed as the Doctor Doom.[15] Doom told Doctor Strange his origin as Rabum Alal. He had travelled to the past with the Molecule Man, and discovered that Reece was a singularity across every reality created by the Beyonders, the Molecule Men were also weapons which would destroy their respective universe if they died. The Beyonders planned to cause the simultaneous destruction of every reality. Doom opposed them by killing the Molecule Men of and endless number of realities, accidentally causing the incursions with the early death of the first Molecule Men. When Doom later tried to confront the Beyonders and failed, it cost the reduction of the surviving universes from hundreds of thousands to only less than two dozens.[16]

At the same time, the faction of Sunspot's Avengers embarked in the Multiversal journey came face to face with the Beyonders. After losing numbers while defeating two of the Ivory Kings, the last two survivors, Odinson and Hyperion, met their end with delight when countless Beyonders appeared before them to battle.[17]

While approaching Earth, the Shi'ar alerted humanity that they had two hours left to live until Earth was destroyed by their fleet. Using a super weapon capable of channeling the Earth's power, Sunspot and A.I.M. retaliated against the Shi'ar in front, while S.H.I.E.L.D.'s Avengers used a Planetkiller seized from the Builders to attack from behind. However, A.I.M.'s weapon overheated and exploded, and the Planetkiller was destroyed by the Annihilation Wave. With no options left, the Avengers prepared to meet their end. However, the Illuminati used the controller disk of a rogue planet that shared the same space with Earth while phased while Iron Man flew to the Sol's Hammer, and prepared to use it.[11]

Meanwhile, in the Ultimate Universe, the Maker and the Cabal contacted Nick Fury to inform him about the incursions, specifically the final incursion. Director Fury was unwilling to let his planet Earth be destroyed without fighting, and readied S.H.I.E.L.D. in order to attack the incursive Earth when the incursion happened.

As the Earth was shielded by the rogue planet, Iron Man charged and fired Sol's Hammer toward the Shi'ar fleet, completely destroying it and saving the Earth. The final incursion was still coming, and the Illuminati and the Avengers started planning on whom to take to their "lifeboat." Most agreed that Tony's talents made him a suitable candidate to bring with them, but in end disqualified him due to his recent actions. Steve still wanted to settle up with Tony, and confronted him with less than four minutes for the final incursion. Tony admitted that he had lied to Steve, and knew about the incursions all along, but he also confessed that he wouldn't have changed anything in his course of action. The final incursion between Earth-616 and Earth-1610 started, and helicarriers descended from the other Earth attacking Earth-616's while Tony and Steve kept fighting, with one of them crushing the pair.[18] 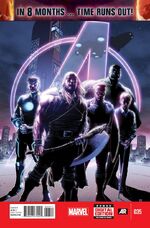 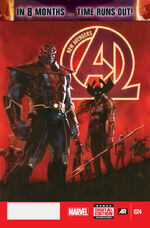 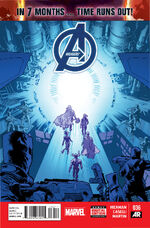 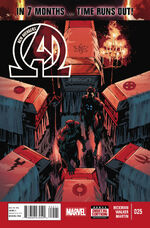 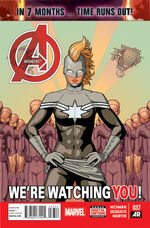 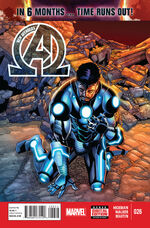 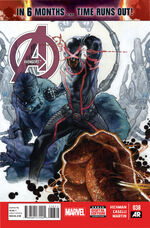 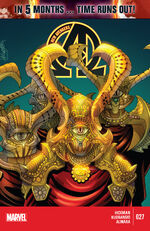 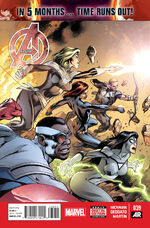 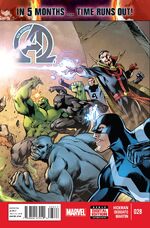 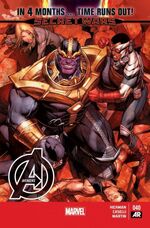 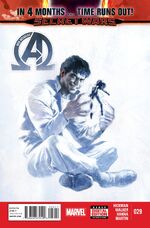 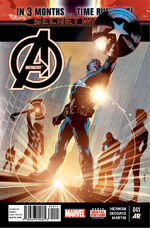 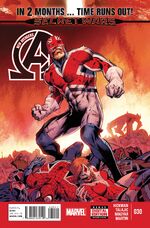 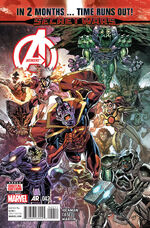 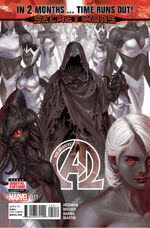 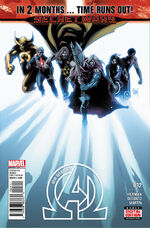 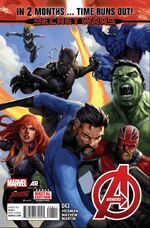 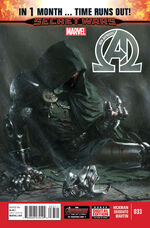 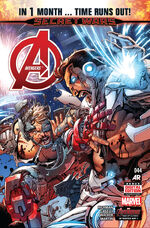 Before Time Runs Out

Retrieved from "https://marvel.fandom.com/wiki/Time_Runs_Out?oldid=5765432"
Community content is available under CC-BY-SA unless otherwise noted.