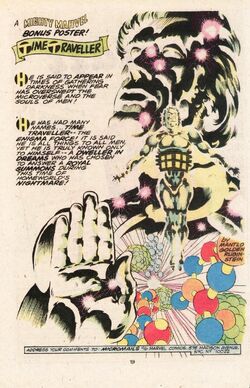 Time Travelers typically appear as glowing green ethereal figures that strongly resemble Commander Arcturus Rann. They are almost as mysterious as the Enigma Force they serve. They observe, but they do not interfere. They hold great power, but they give it to others to use. The Shadow Priests claimed that they were only shadows next to the light of the Enigma Force.[citation needed]

As individual entities, they are vulnerable. Baron Karza was able to capture several and drain energy from them.[1] They are also able to act independently of the Enigma Force and travel to other universes.[citation needed]

Like this? Let us know!
Retrieved from "https://marvel.fandom.com/wiki/Time_Travelers_(Earth-616)?oldid=6445935"
Community content is available under CC-BY-SA unless otherwise noted.