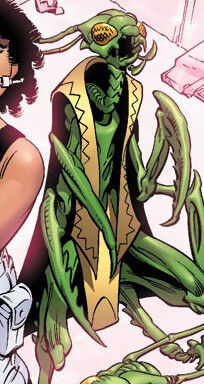 The Timebreakers are a race of insect-like beings who came upon the Crystal Palace and attempted to create teams of super-heroes to correct discrepancies in the Multiverse they originally caused, therefore keeping all realities in existence.[1]

There are two distinct types of Timebreakers in their species, one that is short and stocky (Worker Caste), and one that is tall and skinny, looking much like a grasshopper (Sovereign Caste).

Like this? Let us know!
Retrieved from "https://marvel.fandom.com/wiki/Timebreakers?oldid=6076488"
Community content is available under CC-BY-SA unless otherwise noted.