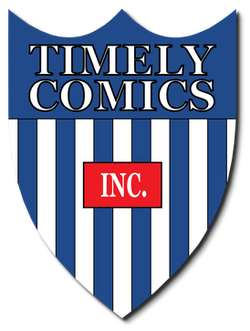 Timely Comics is the 1940s comic book publishing company that would evolve into Marvel Comics. During this era, called the Golden Age, "Timely" was the umbrella name for the comics division of pulp magazine publisher Martin Goodman, whose business strategy involved having a multitude of corporate entities (including Red Circle Comics) all producing the same product. Timely was originally located in the McGraw-Hill Building on West 42nd Street in New York City, and later moved to the 14th floor of the Empire State Building.

In 1939, with the emerging medium of comic books proving hugely popular, and the first superheroes setting the trend, Goodman contracted with newly formed comic-book "packager", Funnies, Inc. to supply material.

That initial comic, cover-dated October 1939, quickly sold out 80,000 copies, prompting Goodman to produce a second printing, cover-dated November 1939 and identical except for a black bar in the inside-front-cover indicia over the October date, and the November date added at the end. That sold approximately 800,000 copies.[1] With a hit on his hands, Goodman began assembling an in-house staff, hiring Funnies, Inc. writer-artist Joe Simon as editor. Simon brought along his collaborator, artist Jack Kirby, followed by artist Syd Shores.

Marvel Comics was rechristened Marvel Mystery Comics with issue #2 — the magazine would last through #92 (June 1949) — and Timely began publishing additional titles, beginning with Daring Mystery Comics #1 (Jan. 1940), Mystic Comics #1 (March 1940), Red Raven Comics #1 (Aug. 1940), The Human Torch #2 (premiering Fall 1940 with no cover date and having taken over the numbering from the unsuccessful Red Raven), and Captain America Comics #1 (March 1941). Going on sale in December 1940, a year before the bombing of Pearl Harbor, and already showing Cap socking Hitler in the jaw, that first issue sold nearly one million copies.[2]

With the hit characters Human Torch and Sub-Mariner now joined by Simon & Kirby's seminal patriotic hero Captain America, Timely had its "big three" stars. Rival publishers National Comics/All-American Comics, the sister companies that would evolve into today's DC Comics, likewise would have their own "big three": Superman and Batman from National, plus the soon-to-debut Wonder Woman from All-American, where she would join the Flash, Green Lantern. Timely's other major competitors were Fawcett Publications (Captain Marvel, introduced Feb. 1940); Quality Comics (Plastic Man, Blackhawk, both Aug. 1941); and Lev Gleason Publications (Daredevil, Sept. 1940; unrelated to the 1960s Marvel hero).

Other notable Timely characters, many still seen both in modern-day retcon appearances and in flashbacks — include super-speedster the Whizzer, Miss America, the Destroyer; the Black Marvel; the original Vision, who inspired Marvel writer Roy Thomas in the 1960s to create a Silver Age Vision; and the Blazing Skull and the Thin Man, two members of the present-day New Invaders.

Just as Captain America had his teenage sidekick Bucky and DC Comics' Batman had Robin, the Human Torch acquired a young mutant partner, Toro, in the first issue of the Torch's own magazine. The Young Allies — one of several "kid gangs" popular in comics at the time — debuted under the rubric the Sentinels of Liberty in a text story in Captain America Comics #4 (June 1941) before making it to the comics pages themselves the following issue, and then eventually into their own title.

Seeing a natural "fire and water" theme, Timely was responsible for comic books' first major crossover, with a two-issue battle between the Human Torch and the Sub-Mariner that spanned Marvel Mystery Comics #8-9 — telling the story, Rashomon-style but years before Rashomon, from the two characters' different perspectives.

After the Simon & Kirby team moved to DC late 1941, having produced Captain America Comics through issue #10 (Jan. 1942), Al Avison and Syd Shores became regular pencilers of the celebrated title, with one generally inking over the other. Stan Lee (né Stanley Lieber), a cousin of Goodman's by marriage who had been serving as an assistant since 1939, at age 16 1/2 [3], was promoted to interim editor just shy of his 19th birthday. Showing a knack for the business, Lee stayed on for decades, eventually becoming Marvel Comics' publisher in 1972. Fellow Timely staffer Vincent Fago would substitute during Lee's World War II military service.

The staff at that time, Fago recalled, was, "Mike Sekowsky. Ed Winiarski. Gary Keller was a production assistant and letterer. Ernest Hart and Kin Platt were writers, but they worked freelance; Hart also drew. George Klein, Syd Shores, Vince Alascia, Dave Gantz, and Christopher Rule were there, too".[4]

Features from this department include "Dinky" and "Frenchy Rabbit" in Terrytoons Comics; "Floop and Skilly Boo" in Comedy Comics; "Posty the Pelican Postman" in Krazy Komics and other titles; "Krazy Krow" in that character's eponymous comic; and in various titles, "Tubby an' Tack" and "Ziggy Pig & Silly Seal".

In slightly more grownup fare, Timely in 1944 and '45 initiated a sitcom selection of titles aimed at female readers: Millie the Model, Tessie the Typist and Nellie the Nurse. Timely also published one of humor cartoonist Basil Wolverton's best-known features, Powerhouse Pepper. The first issue, cover-dated Jan. 1943, bore no number, and protagonist Pepper looked different from his more familiar visualization (when the series returned for four issues, May-Nov. 1948) as the bullet-headed bozo in the striped turtleneck sweater.

After the wartime boom years — when superheroes had been new and inspirational, and comics provided cheap entertainment for millions of children, soldiers and others — the post-war era found superheroes falling out of fashion. Television and mass market paperback books now also competed for readers and leisure time. Goodman began turning to a wider variety of genres than ever, emphasizing horror, Westerns, teen humor, crime and war comics, and introducing female heroes to try to attract girls and young women to read comics.

In 1946, for instance, the superhero title All Select Comics was changed to Blonde Phantom Comics, and now starred a masked secretary who fought crime in an evening gown. That same year, Kid Komics eliminated its stars and became Kid Movie Comics. All Winners Comics became All Teen Comics in January 1947. Timely eliminated virtually all its staff positions in 1948.

The precise end-point of the Golden Age of comics is vague, but for Timely, at least, it appears to have ended with the cancellation of Captain America Comics at issue #75 (Feb. 1950) — by which time the series had already been Captain America's Weird Tales for two issues, with the finale featuring merely anthological horror/suspense tales and no superheroes. The company's flagship title, Marvel Mystery Comics, starring the Human Torch, had already ended its run (with #92, June 1949), as had Sub-Mariner Comics (with #32, the same month). Goodman began using the globe logo of Atlas, the newsstand-distribution company he owned, on comics cover-dated Nov. 1951.

Retrieved from "https://marvel.fandom.com/wiki/Timely_Comics?oldid=4767233"
Community content is available under CC-BY-SA unless otherwise noted.