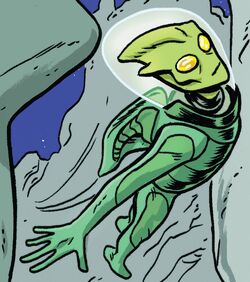 Tindly Hardlesnop was the top builder of the Brundlebuds, and one of the millions saved by the Silver Surfer when he stabilized their sun. While for most Brundlebuds things went back to normal after a while of praising the Surfer, Hardlesnop's love for him grew with each passing day. He focused his passion into building the Brundleboost Wonder-Suit, with which he left the planet to seach for the Silver Surfer.

The miniature adventurer eventually crossed paths with his hero, and requested to become his helard, or as he misinterpreted it, his "Harold." Because of this, Tindly became the Surfer's second companion next to Dawn Greenwood, and became known as "Tiny Harold." Tiny Harold was crucial in helping his friends defeat several foes, including Cap'n Sharr, the mad mechanical moon of Mobos, and Blastaar, in each occasion using his small size to his advantage. Harold also showed his bravery when he set out to defeat the giantic Null-Set, even though said creature was the size of a nebula.

Hardlesnop left the Surfer and Dawn's side when they came across a miniature planet named Zeebie inhabited by creatures so small the Surfer couldn't detect them without enhancing his cosmic senses. After saving them from the collison of mote of space dust, which was equivalent to a meteor for them, Tindly decided to remain by their side and become their guardian and champion, knowing that as daunting and lonely said task was, it was a noble one.

As they bid farewell, the Surfer promised Harold they would never forget him, and would also tell his tales.[1]

Like this? Let us know!
Retrieved from "https://marvel.fandom.com/wiki/Tindly_Hardlesnop_(Earth-616)?oldid=4148391"
Community content is available under CC-BY-SA unless otherwise noted.