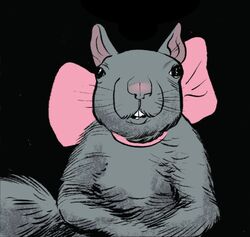 After Monkey Joe was murdered by Leather Boy,[10] Squirrel Girl recruited an army of local squirrels to aid the Great Lakes Avengers in battling Maelstrom and Batroc's Brigade. All of the squirrels died except for Tippy-Toe, who became Squirrel Girl's new permanent partner.[1]

Tippy-Toe assisted Squirrel Girl on several adventures including defeating M.O.D.O.K. when she scratched his face and disabled his Doomsday Chair and disarming Thanos.[11]

Because he failed to collect the soul of Monkey Joe, Deathurge was left trapped in the form of a squirrel for months. To escape his squirrel form, Deathurge offered to murder Tippy-Toe and bring her soul to Oblivion. However, this proved to be more difficult then Deathurge planned because Tippy-Toe continually evaded his traps.[11]

When Speedball visited the University of Wisconsin, Squirrel Girl went to meet him but instead, she ended up fighting Bug-Eyed Voice who tried to attack Speedball. Fortunately, Tippy-Toe contacted Speedball's manager and had him meet Squirrel Girl at the GLX headquarters.[12]

During a visit to New York City, Squirrel Girl and Tippy-Toe helped The Thing defeat Bi-Beast in Central Park.[13]

With Doreen enrolled as a computer science student at Empire State University, Tippy-Toe continued to aid Squirrel Girl in her superheroics. Tippy-Toe accompanied Squirrel Girl to the moon to confront Galactus and also visited Nutopia XXIV with them.[16]

Tippy-Toe refused to side with Squirrel Girl's evil clone when she wanted to rid the world of humans. Later, she nearly sacrificed her life to save Doreen when she was sent to the Moon by Allene.[7]

During a Halloween party costume contest M.C.'d by Squirrel Girl, Leather Boy, the murderer of Monkey Joe, showed up. Leather Boy, still thirsty for revenge against Squirrel Girl for joining the G.L.A., tried to kill Tippy-Toe. Fortunately, Deadpool was also in attendance and saved Tippy. Later, Deadpool left Leather Boy tied up in a tree to be attacked by squirrels.[19]

Searching from a way to defeat Galactus, the Chtty and the Chrrt-chuks abducted Tippy-Toe (and Nancy Whitehead by mistake) and placed into a simulation to trick them into revealing the secrets of Galactus's defeat. It was discovered that Chrrt-chuks were actually being extorted by a fake Silver Surfer. Gaining a small portion of the Power Cosmic, Tippy-Toe tried to punish the grifters, but when she was outwitted, she gave the Power Cosmic to Nancy instead.[20]

Tippy-Toe is a baseline squirrel with the powers and abilities common to her species.[21][3]

Like this? Let us know!
Retrieved from "https://marvel.fandom.com/wiki/Tippy-Toe_(Earth-616)?oldid=6467273"
Community content is available under CC-BY-SA unless otherwise noted.