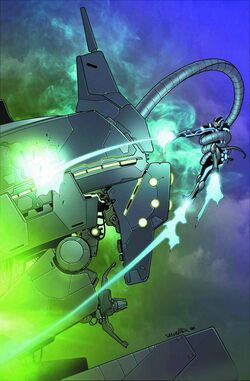 The Titanomech was a weapon of mass destruction conceived by Tony Stark some time before the Civil War with the help of his protégé Peter Parker.[2] Its design was stolen from Stark and uploaded to the Internet during his fall at the moment of Norman Osborn's reign.[3]

A group of anarchists known as the Bastard Sons of Wilbur Day got their hands on the designs and tried to build a Titanomech. Their sloppy handiwork caused the proto-Titanomech to be less than a threat for the combined force of Iron Man and Spider-Man, who had tracked down the Bastard Sons to stop them.[2]

The Mandarin acquired the designs, and forced Ezekiel Stane to build a set of Titanomechs[4] as the means to provide bodies to the spirits inside his rings.[5] However, Stane's first demonstration of a Titanomech failed miserably.[6] In light of this failure, the Mandarin took control of Tony Stark's mind and turned him into a slave to build the Titanomechs.[7]

With three Titanomechs finished, the Mandarin took three of his rings and put them on each of the machines.[8] However, Stark, Stane and other prisoners rebelled against the Mandarin, and fought the Titanomechs.[9] The deadly machines were destroyed when Resilient remotely connected Iron Man to network of microrobots known as the Swarm, which Stark weaponized to lay waste to the Titanomechs.[10]

Like this? Let us know!
Retrieved from "https://marvel.fandom.com/wiki/Titanomech?oldid=6432797"
Community content is available under CC-BY-SA unless otherwise noted.