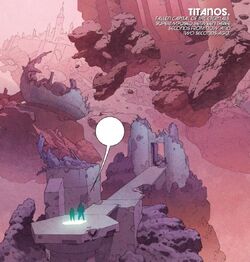 Titanos was the ancestral home of the Eternals from Earth. The abandoned city was located somewhere in what's now modern-day Northwest Territories, Canada, yet superimposed between two second before and three after any moment.[2]

When Uranos and his followers later settled on one of Saturn's moons they named it Titan in honor of Titanos.[3]

Like this? Let us know!
Retrieved from "https://marvel.fandom.com/wiki/Titanos?oldid=6093891"
Community content is available under CC-BY-SA unless otherwise noted.