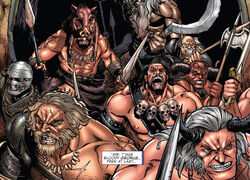 The Titans are the children and progeny of the ancient primeval sky-god Ouranos and his wife Gaea the primeval Earth-goddess. Ouranos was very proud of the Titans for their physical perfection, but Gaea had other children, known as the Cyclopes, who had one eye in the center of their heads, and the hundred-armed Hekatonkheires. Ouranos hated his other children and exiled them into the other-dimensional world of Tartarus. Gaea greatly grieved for her children and called upon one of her sons to depose Ouranos and free their siblings from the underworld. None of her sons would raise a weapon against Ouranos except for Cronus, the youngest of the Titans, who used a sickle to castrate Ouranos and dismember his corpse.[1]

The dying Ouranos prophesied that Cronus would be overthrown by one of his own sons.[2]

Cronus seized Olympus and ruled over Ancient Greece, but he neglected to free the Cyclopes or the Hekatonkheires. His wife, Rhea, was guided by Gaea to conceal the birth of her youngest son, Zeus, feeding Cronus a boulder in place of the infant. Upon adulthood, Zeus freed the Cyclopes and the Hekatonkheires as allies to conquer Olympus. Zeus was supported by a few of the Titans and by his freed siblings, supposedly swallowed by Cronus in order to prevent the prophecy of Ouranos. The Titans were defeated and imprisoned in Tartarus watched over by Zeus' brother, the god Hades, who reserved part of the underworld as a realm of the dead.[2]

In later years, the Titan Prometheus recalled on his pact of honor to Hercules. In ancient times, Prometheus had taken fire from the heavens to grant it to mortal man and Zeus had ordered him chained to the Caucasus Mountains on Earth as punishment. Hercules had freed him from his bindings, and when he was in a delirium after attacks by his enemies, Prometheus sacrificed part of his life-force to cure him.[3]

The Titans were worshiped as gods by the Ancient Greeks.

Like this? Let us know!
Retrieved from "https://marvel.fandom.com/wiki/Titans_(Olympians)?oldid=5648847"
Community content is available under CC-BY-SA unless otherwise noted.