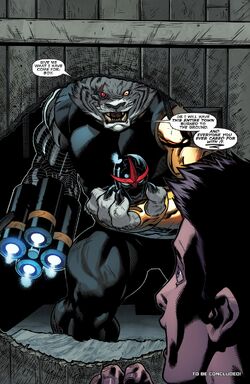 Titus lies to Sam telling him that he had killed his father however this is not true because Jesse Alexander is being held captive by the Chitauri. When Titus finds Sam he threatens not only him, but everything he holds dearly to him in exchange for the Ultimate Nullifier he stole from their ship. Sam then gets back his helmet from Titus and takes them both to outer space, expecting the lack of oxygen to kill Titus. When that plan fails Sam takes out the Ultimate Nullifier and tells Titus to take his forces and leave. Titus and Sam then struggle for the gun and Sam accidentally triggers it killing Titus and an entire fleet of Chitauri.[3]

Titus later turned up alive and partnered with Death's Head to ambush Sam and the recently resurrected Nova Prime while the pair was visiting Knowhere. He was defeated by Sam and Rider, however.[4]

Considering he was once a Supernova, it can be presumed that Titus formerly possessed the typical powers of a Supernova.

Able to breathe in outer space.

Like this? Let us know!
Retrieved from "https://marvel.fandom.com/wiki/Titus_(Earth-616)?oldid=6294218"
Community content is available under CC-BY-SA unless otherwise noted.