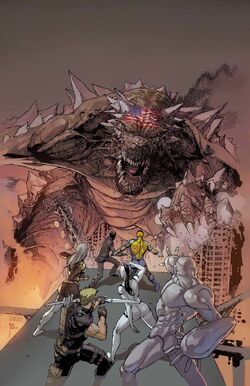 US Army Corporal Todd Ziller was the test subject of a procedure by Project: Troubleshooter, America's latest division in human weapons, in an attempt at recreating Abraham Erskine's Super-Soldier Serum.

Due to the difficulty of recreating said formula, most of the knowledge gaps were filled with hacked and reverse-engineered versions of a dozen of other transformative substances. The final result included Gamma enhancements, Mutant Growth Hormone, Pym Particles and the Connors Formula. The ensuing application of the serum in Ziller's body turned him into a giant reptile similar to Godzilla, for which he was given the alias of "American Kaiju."[1]

When Avengers Idea Mechanics performed an illegal operation to rescue Rick Jones from S.H.I.E.L.D. custody, the American Kaiju was unleashed, for the first time, to attack the Avengers Island.[2]

Ziller was attacking A.I.M.'s facilities when he encountered opposition in the form of A.I.M.'s Avenger Five.[1] The Avenger Five fought the American Kaiju in order to buy A.I.M. enough time to evacuate the Avengers Island. Using the exceeding energy from one of the Avenger Five's Gamma reactors, they shorted out Ziller's Gamma enhancements, turning him back to human.[3]

Depowered, Ziller found his way to Castle Kruger, Lichtenbad, where he assisted mad scientist Victor Vandoom in perfecting his monster serum using the lingering traces of the Kaiju Formula in Ziller's body. In compensation, Vandoom turned Ziller back into the American Kaiju, and had him fight Deapdool and Red Hulk, the latter having being sent by S.H.I.E.L.D. to retrieve Ziller. Red Hulk managed to defeat the American Kaiju and hurled him against Castle Kruger, knocking him down and turning him back into a human. Ziller was subsequently apprehended.[4]

Ziller was allegedly a "man of few words," and seemingly an ultra-patriotic type of guy. He was inferred to be the subject of a chain e-mail where an atheist college professor is punched out by a religious ex-Marine student.[1]

Seemingly those of the Lizard and of Hank Pym when at a very large size but augmented by MGH and Gamma treatments. The Gamma treatments may have also given him powers similar to the Abomination's or the Hulk's.

Like this? Let us know!
Retrieved from "https://marvel.fandom.com/wiki/Todd_Ziller_(Earth-616)?oldid=5493444"
Community content is available under CC-BY-SA unless otherwise noted.