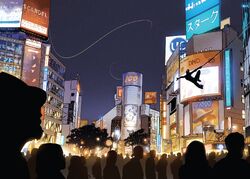 Tokyo is the capital city of Japan on the island of Honshu.

The Imperial Japanese Army was heavily involved in World War II as part of the Axis Powers. As a result of their attacks on Pearl Harbor in 1941, Tokyo often became the site of battles between Japanese forces and American super-humans and costumed adventurers. On two occasions in 1943, the Young Allies found themselves in Tokyo. The first was during their mission to save Chinese fighter pilot Wing Toy, leading to a clash in Tokyo against the Serpent wherein they delivered a personal and humiliating defeat to Emperor Hirohito himself.[2] The Young Allies were forced back to Tokyo as prisoners of the Whip who sought to torture them, but the Allies managed to break free and once more deliver a humiliating defeat to Hirohito before fleeing back to the United States once more.[3]

1944 saw the start of air raids on Tokyo by the United States Air-Force, including Operation: Doolittle which caused much damage to the city. According to one account, the Japanese army attempted to camouflage Tokyo and build a false city. This false city was exposed by Jap Buster Johnson.[4] However, records show that Johnson died at Guadacanal in 1943, as such this tale is likely a propaganda comic commissioned by the American military published by Timely Comics.[5] Shortly after the Doolittle raid, Japanese forces managed to capture the Sub-Mariner who became a personal prisoner of General Hideki Tojo in Tokyo until the Atlantean monarch escaped imprisonment.[6] Under the command of General Yokima a tunnel was constructed linking Tokyo to the United States for a planned invasion of America. This plot was exposed by Captain America and Bucky who destroyed the tunnel.[7] Shortly thereafter, the Destroyer traveled to Tokyo to focus on the Imperial Japanese army. Arriving in Tokyo, he battle Japan's greatest warrior the Juggernaut to the death before fleeing Japanese forces.[8] The Destroyer's operations in Tokyo also found him freeing Chinese slaves from concentration camps in Tokyo and destroying General Muki's anti-invasion device.[9] The Destroyer destroyed the Yuanie Arsenal located in Tokyo's Okaie Industrial District with the assistance of Chinese resistance fighter Mother Ting and her rebels.[10]

Tokyo was subject to a series of bombings by American forces in 1944 and 1945, until the Japanese ultimately surrendered in September 1945.

In 1956, atomic tests on the Pacific coast spawned the monster Godzilla. The creature rampaged through Tokyo before being defeated.[11]

In 8155 massive fights erupted in East Tokyo between the Yakuza and the People's Co-operative supporters. The following civil unrest continued through 8156.[12]

On Earth-7642, a base housing sentinels was located in a sewer underneath Tokyo. Cyblade and Ripclaw was captured by a sentinel and held captive in the base until being freed by Psylocke and Wolverine. The sentinels turned on and attacked the heroes, with their battle spreading into the streets of Tokyo.

Tokyo was drowned with the rest of Japan when Atlantis tried to destroy the surface-world. As Namor Miyamoto, the half-Atlantean/half-Japanese mutant, witnessed this event, he led on Atlantis with the intention to confront the Atlantean High Command and as this nation was destroyed too, by Charles Xavier, Namor vow his life to avenge his two people from the British fascist for ten years.[13]

Like this? Let us know!
Retrieved from "https://marvel.fandom.com/wiki/Tokyo?oldid=5918537"
Community content is available under CC-BY-SA unless otherwise noted.