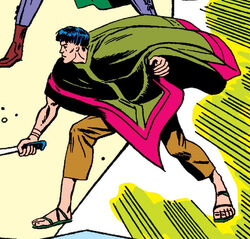 Toloc was hired by El Tigre to help him in the search of the treasure of the Mayan. Ramon and he tried to capture El Tigre, but he neutralized them both with his mental powers and then they followed El Tigre to New York. In the City museum he defeated Iceman by setting a trap up with a simple rope and a flight of stairs. He used a prehistoric spear against the Angel, and hiding in the shadows hit him with a dart soaked in narcotic.

With Ramon, he tried to take the Pendant to Kukulcan, but they were knocked down by the solar powers of the God. [1]

Like this? Let us know!
Retrieved from "https://marvel.fandom.com/wiki/Toloc_(Earth-616)?oldid=5398282"
Community content is available under CC-BY-SA unless otherwise noted.