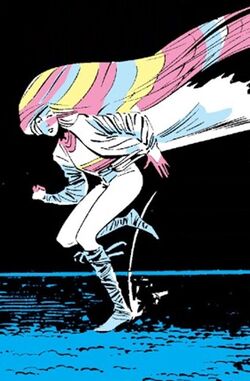 Tommy was a young Morlock. She ran away from New York after the Marauders killed some of her Morlock friends under as yet unspecified circumstances. She was rescued by the Hellfire Club mercenary Richard Salmons and brought to Los Angeles, where the Marauders tracked her down. Stunned by one of Harpoon's spears, Richard begged Tommy to give him his gun, but Tommy panicked and fled, abandoning Richard, who was soon afterwards shot by Scalphunter.[1]

Tommy hitchhiked a train ride back to New York, where she was trailed by some of the Marauders to 'The Alley', the Morlock home in the New York sewer tunnels. Just when Tommy was about to flee into the tunnels, she was incapacitated by Harpoon and then shot by Scalphunter. She was therefore the first person to die in the Mutant Massacre.[1]

Many years later, following the foundation of a mutant state in Krakoa by the hand of Charles Xavier and his allies, Tommy resurfaced as a citizen of the nation, having been presumably reborn by the hand of The Five, a group of mutants capable of combining their powers into a process of resurrection, brought together by Xavier as part of his plans for mutant ascension.[2]

Two-Dimensional Form: Ability to render herself into a two-dimensional state in which her body was as flat as paper.

Like this? Let us know!
Retrieved from "https://marvel.fandom.com/wiki/Tommy_(Morlock)_(Earth-616)?oldid=5621723"
Community content is available under CC-BY-SA unless otherwise noted.