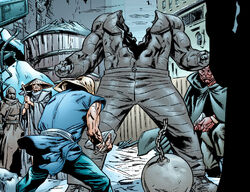 The genesis of the Tong of Creel begins with Carl Creel, also known as the Absorbing Man. In recent history on Earth-9997, he had absorbed the intelligence of Ultron, which allowed the Absorbing Man to use the full potential of his powers. He would go on a rampage through Washington, D.C. and would be met in opposition by the Avengers. Creel would end up using his superior powers to murder the Earth's mightiest heroes. However, the Vision, sole survivor would defeat Creel by infecting him with a computer virus. When Creel shrank down and turned into stone to try and purge the virus, the Vision smashed the Absorbing Man into pieces. The parts of Creel were handed out to various members of the super-hero community in secret to insure that the components of Creel were never reassembled.
When the Terrigen Mist (released into Earth's atmosphere by Black Bolt) began to mutate all the humans on Earth, Dr. Strange's man-servant Wong would fall victim to the mists. His mutation would manifest by turning him into a conjoined twin with split personalities. One side evil, the other good. His evil half was spiteful of Dr. Strange and wished revenge for all the years "forced" into Strange's servitude. Mephisto, once again manipulating humanity would use this to play to his advantage, hoping to create significant chaos on Earth-9997 for someone to use time travel to try and "fix" reality, creating a divergent universe for him to escape into and avoid judgment at the end of time.
To this end, Mephisto convinced Wong to betray Dr. Strange. At a time when Strange was traveling through various realms in his astral form, he would use spells to make Clea fall in love with Loki and grow bitter towards Strange's ignorance of her needs. She would slay Strange's astral form, trapping it in the Realm of the Dead while his soulless body lived on in the land of the living, making him incapable of being any use to Mar-Vell in the Realm of the Dead.
As an ultimate jest, Mephisto forced Wong to care after Strange's body, however he would also have Wong form the Tong of Creel under the guise of the Red Ronin. Their purpose was to collect the parts of the Absorbing Man and reassemble them so that they could use Creel as a means of wiping out everyone on Earth. In order to learn the locations and who had all the parts of Absorbing Man, Mephisto would disguise himself as a man named Mr. Church and connive his way into the Church of Immortus. There he would convince the Grey Gargoyle to get his friend Kyle Richmond to tell his visions of the future and record them down. In exchange for providing this information "Church" promised to make the Gargoyle once more be able to feel things again.
When Her gave birth to the reborn Mar-Vell, Castle Doom was attacked by mutants whom everyone believed that they were mutants that were afraid that the birth of a new child meant the end of their mutations. It turned out that the Tong of Creel were somehow involved as they took Her into their custody where she would be their prisoner for the next three years. The full motivation behind this is unknown, however Red Ronin suggested that it was an attempt to demoralize Adam Warlock, comparing Clea's betrayal of Dr. Strange as an eventual outcome for their relationship.
Mephisto would then communicate the location of the different parts of Creel in order for them to collect each one. With Kyle's visions of the future the Tong was always successful. Parts of the Absorbing Man were given to Hobie Brown, a Red Guardian, Sunfire, Reed Richards, King Britain, Johnny Blaze and others. The Tong succeeded in collecting all the parts, however their attacks on the portion trusted to Sunfire (now in the possession of Tao of the super-group Xen from Japan), Reed Richards (at his base within Castle Doom) and King Britain (in an attack on Buckingham Palace) have been recorded. However, they have admitted that upon taking to piece from Johnny Blaze, they killed the hero, this has been substantiated since Blaze's soul has been seen in the Realm of the Dead.
Their first recorded attack was on Japan where they succeeded in recovering Creel's hands from Tao of Xen. Attacking Buckingham Palace next, King Britain counterattacked with the aid of the Iron Men, the Dragon Man, Black Bolt (Ahura), Medusa and an army of Union Jacks. They failed in stopping the Tong from stealing the part of Creel trusted to King Britain. Later they would attack Castle Doom in Latveria. The attack was covered by members of mutated humanity who believed the Church of Immortus' propaganda about the Human Torches stealing their powers and humanities destinies in the stars. During the attack, the Tong not only succeeded in capturing the head of Creel, but also stole Dr. Doom's time machine.
In succeeding in collecting Creel's components, they reassembled Creel and the murderer was instantly restored to life. They set Creel loose on New York City, where he literally absorbed the entire island of Manhattan. At this time, Adam Warlock learned of Her's fate and tracked her down with the help of Mar-Vell and X-51. Adam Warlock would defeat the members of the Tong of Creel, and kill their leader Red Ronin who was revealed as Wong -- his hidden mutation revealed at last. Warlock would listen to Wong's good halves pleas to be put out of his misery, killing him and freeing Her.
Creel would ultimately stop his attack on New York, when Loki convinced him to save the Earth to turn into Vibranium and save the Earth from destruction. Leaving a shell of his gigantic body as a monument to his selfless sacrifice. Following Creel's sacrifice and Wong's death, the Tong disbanded, it is unknown if there were any survivors following Warlock's attack.

Retrieved from "https://marvel.fandom.com/wiki/Tong_of_Creel_(Earth-9997)?oldid=5551779"
Community content is available under CC-BY-SA unless otherwise noted.