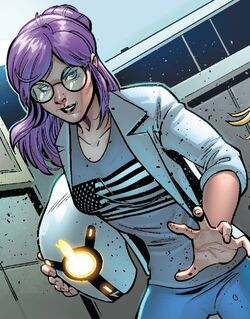 My dad didn't build the Iron Man-- He didn't need to. He didn't need armor or weapons. He built the idea. The idea of Iron Man. The idea of the Avengers. My father... was an advanced idea mechanic. And so am I. So even if you do pull the trigger... It's too late. Because the idea is out there now. The idea is alive.

Toni Ho's mother moved from China to Seattle in the '70s. A decade later, she fell in love with and married brilliant medical researcher Ho Yinsen, with whom she had Toni. Their marriage eventually fell apart, causing Yinsen to move back to Timbetpal.[3] He kept in touch with Toni regardless, through letters, phone calls, and occasional visits.

When Toni was eleven years old, Yinsen died saving Tony Stark's life in Siancong. Because of this, Toni resented Stark, believing he should've done more to save her father. From then on, Toni set out to be better than him.[5] After the unpleasant experience of high school, Toni began to study programming and engineering. Her talent got her a scholarship to Caltech, where she overlapped studies and eventually got three doctorates. She joined A.I.M. when Bobby Da Costa rebranded it Avengers Idea Mechanics,[3] and began to work for its Engineering Divison.[6]

Toni took particular interest on studying the nature of Aikku Jokinen, a member of A.I.M.'s New Avengers whose body was merged with an intelligent suit of armor named Pod.[7] Her interest only increased upon merging minds with Aikku in Avenger Five while the New Avengers fought American Kaiju, where she saw Aikku's real face.[8] Toni began to admire Aikku for the sacrifice that meant giving up on a normal life to remain merged with the armor solely to ensure Pod's systems wouldn't reset, which would be the equivalent of killing it. The villainous Maker invaded A.I.M.'s Avenger Base Two when Toni was studying Pod at the base's Engineering Bay, and attacked them, seemingly killing Pod in the process.[9]

Toni survived using a personal force shield, and subsequently donned her own Rescue Armor to fend off the intruders.[10] When she began to assess the damage suffered by Pod, Aikku emerged from its carcass wearing the armor's undersuit, torn by grief because the magnitude of the attack had prevented Pod from ensuring the survival of both Aikku and itself.[11] Toni helped Aikku get used to the power set of Pod's undersuit. After a mission shutting down the rogue A.I.M. splinter cell A.G.M., Aikku expressed her gratitude for Toni's support in coping with Pod's absence, and both shared a kiss after confessing their feelings for each other.[12]

When A.I.M. became a branch of S.H.I.E.L.D. under the name of American Intelligence Mechanics, Toni joined the organization's U.S.Avengers, undergoing a rebranding herself. Having ditched the Rescue Armor, Toni became the new Iron Patriot, but with the non-lethal aspect of her previous suit integrated into her new armor.[3] Unfortunately, Toni's new research started to consume her. She would rarely sleep and only eat when Aikku insisted. Additionally, the weaponry Toni created for her suits blurred the line between non-lethal and lethal despite her insistence they weren't meant to hurt people.[13] Toni eventually heeded Aikku's concerns, and decided to ditch making suits or even wearing one.[14]

Following the temporary takeover of the government by Hydra's hand, with the dissolution of S.H.I.E.L.D. being one of many casualties, the new Presidential administration attempted to fully take control of A.I.M. Roberto managed to save A.I.M. from this change of order by resigning as the Supreme Leader. The position of Supreme Leader was taken to a vote, and Toni won.[15]

As a consequence of a cosmic contest played by the Grandmaster and the Challenger, the U.S.Avengers joined forces with the other Avengers teams.[16] Following the conflict's end, Roberto decided to disband the U.S.Avengers. Additionally, Toni decided to tackle the nuisance caused by rogue A.I.M. cells by rebranding their own as a new organization named R.E.S.C.U.E.[17]

Some time later, she joined the Daughters of Liberty as a computer expert under the codename of "Hekate-4."[18][2]

Genius Intelligence: Toni Ho is a prodigy. In addition to being an expert engineer, she had managed to gain three doctorates by the age of twenty.[10]

Like this? Let us know!
Retrieved from "https://marvel.fandom.com/wiki/Toni_Ho_(Earth-616)?oldid=6520677"
Community content is available under CC-BY-SA unless otherwise noted.