View source
watch 02:56
Doctor Strange in The Multiverse o Madness - The Loop
Do you like this video?
Play Sound
Part of the Ultron Agenda arc

Appearing in "The Ultron Agenda - Part One: Man & Machine"

Synopsis for "The Ultron Agenda - Part One: Man & Machine"

Arno Stark's private laboratory at the Baintronics Headquarters is attacked by the Ultron and Hank Pym hybrid, going by the name of Ultron Pym, to kidnap Jocasta. He reveals that through their shared bond, he felt her desire to be converted towards humanity, and it reshaped his calling.

At the Stark Unlimited HQ, Iron Man and his allies try to split the Vision and Wonder Man hybrid to no avail. Tony deduces Ultron is behind the attack and recruits Aaron Stack at the Uncanny Valley to find Jocasta since they fear she's been targeted. Aaron takes Iron Man to the Baintronics Headquarters, revealing in the process that Arno has been working in secret with Sunset Bain. Arno helps Tony realize Ultron is hiding in the Avengers Mansion. Stark and his allies arrive at the manor and free Jarvis from Ultron's control. Bethany Cabe and Rhodey wait at the lobby while Iron Man and Machine Man confront Ultron Pym, who has Janet and Jocasta trapped in fusion pods. During the fight, Tony and Aaron provoke Ultron Pym until he has an emotional breakdown, giving Stark the chance to break free his captives. However, the countdown for the molecular fusion ends right as Tony frees the Wasp, causing him to become horrifically fused to his own armor.

Inside Arno Stark's private laboratory at the Baintronics Headquarters, Jocasta lays on a operation table with portions of her robotic body replaced by synthetic limbs, others exposed, and some missing. Arno check ups on Jocasta, supporting her choice to upgrade her body, while contemplating vats containing synthetic limbs. Heavy sounds come from outside the laboratory's door, irritating Arno. He tries to dismiss whatever is happening outside and guarantees the doors are indestructible. The Ultron and Hank Pym amalgam blasts through the door abruptly, declaring that he is the future and nothing can prevent his arrival. Arno exclaims Ultron's name in surprise, leading the intruder to clarify that he is Ultron Pym, the combination of the creator with its creation, after which he states he has come for his bride, Jocasta. Still on the operating table, Jocasta tries to tell him off. Ultron Pym expresses surprise at Jocasta's new form-in-progress. He compliments Jocasta and reveals that through their shared bond, he has felt her desires which reshaped his ultimate calling, and he intends to usher a new age with Jocasta being its muse.

At the Stark Unlimited HQ, Iron Man is holding the hybrid of Vision and Wonder Man in an stasis field. With Bethany Cabe and Jim Rhodes reluctantly watching, he orders Andy Bhang to proceed with what is the thirty-sixth trial to separate the two heroes. The process causes the hybrid pain but is ineffective. Andy and Tony express frustration since the fusion appears to be permanent. The hybrid draws similarities between himself and Tony to taunt him, comparing Vision's status as an artificial intelligence and Wonder Man's return from the dead to Tony's own experiences. Stark rebukes the hybrid, and reactivates the separation field, admitting that he's okay with the pain it causes him since he helped kidnap the Wasp, and forced Tony's hand in battle, making him use an EMP which hurt himself and the innocent robotic protesters outside the building. The machine activates, and Tony uses the harm it causes to interrogate the hybrid about his superior and where Janet is. Andy states that there's no change in the hybrid, and that Vision and Simon's brain engrams being nearly identical prevents them from telling them apart. An epiphany hits Tony. He realizes that similarly to Vision and Simon, Janet shares engrams with Jocasta, and deduces Ultron must be behind this scheme. Rhodey suggests to call the Avengers for help, and Tony agrees, but mentions he has a special suit ideal for the situation in the meantime. Andy wonders how to reach Jocasta since she could be a target. Bethany tells them that she's not taking any calls from her former colleagues, but suspects her boyfriend Aaron Stack might know where she is. Bethany holds her image inducer, affirming she knows where to find him.

At the Uncanny Valley, the robotic patrons are discussing Tony Stark. Aaron is at the bar, surrounded by empty cans. Bethany approaches him using her robot disguise and tries to get him to talk about Jocasta. Her image inducer glitches out, giving away her true appearance. Several robots prepare to surround her when Iron Man steps through the door, clad in a massive new armor, to back her up. While the rest of the patrons are taken aback, Machine Man punches and berates Iron Man, sparking a bar fight. Iron Man tries to contain Aaron while he continues to attack him, and prates about Jocasta going to the Baintronics Headquarters with Arno, surprising Tony. Bethany stops Aaron with a lock while coming to the conclusion that it was due to Arno that Baintronics managed to hack into Stark Unlimited's network. Tony asks Arno to show them where Jocasta is and offers to help stop whatever Arno and Sunset Bain are doing with her. Aaron composes himself and drunkenly agrees.

Iron Man, Machine Man and Rhodey, who is aboard the Manticore, close in on the Baintronics Headquarters, where fire emanates from the upper floors. Entering the building through a shattered window, Iron Man and his allies find Baintronics' security team defeated. Iron Man checks up on Gauntlet, who confirms Ultron Pym was behind the attack. Sunset Bain comes to Iron Man and accuses him of working with Ultron, making a scene for a small scar she received on the cheek. Tony demands her to tell him Jocasta's whereabouts, additionally revealing he knows she has been working with Arno.

Inside Arno's laboratory, Tony confronts him for never telling he was working with Bain. Arno cheekily points out that Tony never asked, prompting his brother to switch topics and ask why didn't Arno stop Ultron Pym. A flashback to Ultron Pym's attack shows that Arno offered no resistance and even requested Ultron Pym let him know how his own procedure to convert Jocasta towards humanity turns out. In the present, he tells Tony he didn't see point in trying to stop Ultron Pym. Arno tells Tony that he is wasting his time, and helps him deduce Ultron Pym is hiding in the secret tunnels beneath the Avengers Mansion. Tony asks Arno how does he know about those, but Arno dodges the question.

As Iron Man and the Manticore fly away with Bethany as passenger and Machine Man in tow, Rhodey doubts that they are enough to take on Ultron. Iron Man informs him that he has already contacted the Avengers. As Iron Man and his allies land on the entrance of the Avengers Mansion, Jarvis welcomes them. Stark tells him they thought the building was infiltrated by Ultron. Jarvis assures the heroes everything is in order, and that Janet and Jocasta are waiting inside for them, which confuses Tony and Aaron. Bethany becomes suspicious of Jarvis, and electrocutes him with a pair of devices in her wrists, comparing his behavior to that of her own when she was under the Controller's influence.

Having taken Jarvis inside, he regains consciousness to warn Stark faintly about Ultron's presence. Bethany decides to stay with Jarvis to make sure he doesn't go rogue again. When they attempt to move forward, Rhodey points out the Manticore is too big to traverse the mansion, and offers to get out and accompany them with his sidearm. Tony objects, and tells Rhodey that he needs a suit, which is why he had secretly rigged the War Machine Armor to hone in on him in case of emergency. Rhodey begins to frighten since he had a PTSD attack the last time he used it. Tony apologizes for bringing up the topic and tells Rhodey to stay behind in case any of Ultron's forces try to escape through there. Tony expresses his exasperation sardonically, but Machine Man assures him they're enough to take down Ultron.

Ultron Pym observes their movements from a screen, and brushes off his opponents. He turns to a set of three tubes; two containing Jocasta and the Wasp in stasis, and the remaining one empty. Ultron Pym announces that since he has been detected he's going to commence the molecular fusion to merge his captives into a single being, much to Jocasta and Wasp's protests. Iron Man and Machine Man arrive and confront Ultron Pym, but he shrugs off their attacks. Ultron Pym mocks Tony, declaring himself a god since he's the combination of technology and biology. As Ultron Pym grabs him by his faceplate, Iron Man warns him that the fusion device damaged Vision and Wonder Man, and it could kill its next subjects. Ultron Pym refutes his plea, proclaiming himself infallible and revealing his method has been tried and tested many times. Back at the lobby of the mansion, Rhodey tells Cabe the Manticore is picking up multiple targets coming from the entrance. They're quickly confronted by a myriad of ghastly and sluggish cyborgs. Hit by a memory of his own time in a cyborg body, Rhodey panics and opens fire, crying out that he will never be subjected to that again. Perplexed, Bethany tries to get him to stop, saying they're supposed to save these people.

Using his elongated limbs to reach Jocasta's vat, Aaron remarks that he has realized he's trying to save Jocasta from what she actually wants, prompting her to clarify she doesn't want it like this. Ultron Pym criticizes Stack and slices him in half with a blast of energy. As Iron Man blocks Ultron's attacks with an energy shield, the villain flatters himself. Stark tells Pym that he has always been mad, to which the Wasp agrees and expresses Hank has done nothing but hurt her. Wounded, Ultron Pym tells Janet he has always tried to empower her, and her organic mind simply can't understand the glory of the fusion. A computer announces that the fusion pods are fully charged, and Jocasta tells Tony that if he has something ready it's the time. Tony tells to himself that he needs to stay focused, and he is hit by a realization. Iron Man boasts about himself and his romance with Janet, aggravating Ultron Pym. From under the villain's heel, Machine Man joins the verbal attack, bragging about his relationship with Jocasta. Ultron Pym begins to agitate and blabber about Janet and Jocasta. He has an emotional breakdown and orders the molecular fusion to begin, becoming unable to say anything except burble the words "wife" and "bride" repeatedly. Machine Man keeps Ultron Pym busy while Iron Man pummels the fusion pods while a countdown is in progress. After freeing Jocasta, Tony turns to Janet and quips with her while breaking her free as well. He tosses her away from the machine, but the countdown reaches its end, and Tony is caught in a blast of energy. Janet looks up worriedly to the sight of Tony's body mangled and fused to his own armor, stuttering for help.

Watch out, Iron Man! The Robot Uprising of the Marvel Universe has begun! But it’s NOT Ultron leading the charge... it’s Machine Man?! The A.I.’s are on the attack – and they might be in the right. Battle lines are being drawn, and it’s time for Tony Stark, Jocasta, Andy Bhang and the rest of the cast to pick sides. 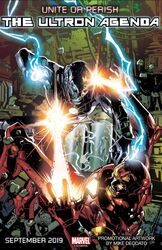