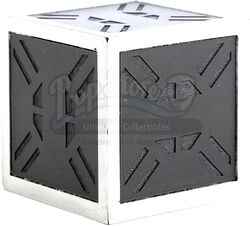 The Toolbox is a Vibranium cube-shaped device given to Phil Coulson by Nick Fury to help rebuild S.H.I.E.L.D.. One of the first instructions in the device was the location of Fury Secret Base 8, otherwise known as the Playground, a hidden S.H.I.E.L.D. base from which Coulson could begin to rebuild.[1]

In the months spent rebuilding S.H.I.E.L.D., Coulson had as much time to study the Toolbox, taking note of the first 0-8-4 (object of unknown origin) known as the Obelisk.[2]

The Toolbox later became a target for acquisition by secret splinter faction of S.H.I.E.L.D, led by Robert Gonzales. Gonzales believed that the Toolbox contained information on superhumans that Fury had kept hidden, and Gonzales wanted that information to help him end their potential threat. To that end he sent agents Mack and Morse to infiltrate Coulson's S.H.I.E.L.D. and steal the Toolbox. The theft was thwarted, forcing Gonzales to capture the Playground instead. However, the Toolbox would only work for Coulson, who had escaped capture and fled. Gonzales turned to Leo Fitz for help with unlocking it, but Fitz chose to resign from S.H.I.E.L.D. and departed the Playground with the Toolbox, leaving Jemma Simmons and a toolbox replica behind him.[3][4][5][6] Fitz later managed to unlock the device, enabling him to get in contact with Coulson and Lance Hunter.[7]

Fitz rendezvoused with Coulson and returned to the Toolbox. Immediately activating the device, Coulson explained that they needed to find Skye, but the problem was that she had been taken by a teleporter of whom Coulson had limited information. He suspected that Hydra might have some leads, as he pulled up files on its remaining leaders, Wolfgang von Strucker and Doctor List, who had recently become interested in superhumans.[8]

When Coulson later turned himself over to Gonzales, he stated that he knew about the dangerous secret Gonzales was keeping on his ship, "The Iliad", revealing that the Toolbox contained information on it, and offered to open it in exchange for his cooperation against Hydra. Gonzales agreed to Coulson's terms, and Coulson honored their agreement permitting Gonzales access to the Toolbox, though he did reveal that Nick Fury was alive and would probably come for it.[9]

After two Inhumans were forced to flee the Iliad after attempting to ascertain the location of a Kree superweapon being held on the carrier, Gonzales asked Coulson if the Toolbox had any information on the alien artifact. Coulson answered that he only knew that Hydra had sought it.[10]

Like this? Let us know!
Retrieved from "https://marvel.fandom.com/wiki/Toolbox?oldid=6465893"
Community content is available under CC-BY-SA unless otherwise noted.