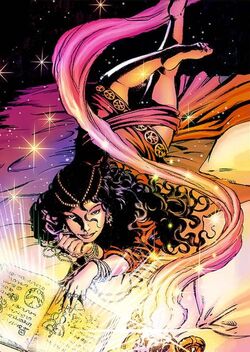 Topaz's origins and real name are unknown, even to herself. As an infant, Topaz was found and adopted by the Sorcerer Taboo, who was living in an Indian prison camp at the time. Years later, Taboo forced Topaz to control the werewolf known as Jack Russell for a time. (Russell was searching for the magical Darkhold tome). Cast out by Taboo after refusing to kill Russell,[2] Topaz chose to help Jack learn to control his werewolf powers, and also became his lover.[3] She assisted Russell many times, including helping him to learn about his family history and even helping him take on Dracula.[4][5]

Jack's grandmother, Maria Russoff, once used Topaz's power to raise an army of zombies as part of a mad revenge scheme. Topaz eventually restored her to sanity, and Maria sacrificed her life once she saw that her actions had placed her grandson in danger.[6] At one point, Topaz was exploited by Dr. Glitternight, who stole a portion of her soul to create a Soul-Beast.[7] Topaz later used her powers to save Jack's sister, Lissa, from the werewolf curse (which was passed from generation to generation within their family).[8] After discovering what Glitternight had done to her, Topaz fought and defeated the villain, regaining her soul in the process.[citation needed]

Topaz also temporarily destroyed the villain known as Mephisto, but unfortunately the demon lord's minions managed to trap her in another dimension with a spell that would remove another portion of her soul and rob her of her empathic powers if she ever left that realm. Later, Mephisto was revealed to be alive, and after he was once again destroyed by Franklin Richards of the Fantastic Four, Topaz was freed from her imprisonment. (Her soul was eventually restored by Doctor Strange and the alien sorcerer known as Urthona).[citation needed]

As Topaz reached the age of 21, her powers reached their full potential, and she used them to heal the wounds of Doctor Strange's loyal servant, Wong. She left Strange's side when he briefly turned to black magics, but later returned to aid him in his fight against Dormammu.[citation needed]

Later, Topaz led a quiet life for a while, running a bar called The Voodoo Lounge. However, once Dormammu got word of her whereabouts, he sought revenge and had one of his agents enslave the young sorceress. Once again, Doctor Strange came to her rescue. Topaz later helped Doctor Strange in yet another battle, joining forces with Jennifer Kale and Satana against the Hellphyr force and fighting yet more zombies and demons. After winning this battle, Topaz decided to leave Strange's side yet again, founding the group known as the Witches in order to protect the world from mystical threats and prevent would-be thieves from stealing the Kale family's Tome of Zhered-Na.[citation needed]

Topaz is a powerful mystic with exceptional empathic, telepathic, and telekinetic abilities. She can magnify or diminish emotions, infuse life energy, and heal injures. She can serve as a familiar to other sorcerers, focusing and magnifying their abilities. She has taken two separate forms, one Caucasian, one Indian.

Topaz is a talented magician.

Teleportation using her own spells.

Like this? Let us know!
Retrieved from "https://marvel.fandom.com/wiki/Topaz_(Earth-616)?oldid=5604309"
Community content is available under CC-BY-SA unless otherwise noted.