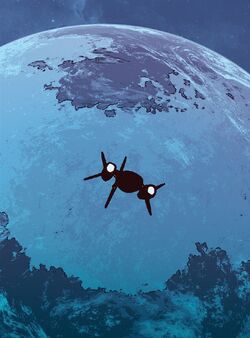 Torfa was a planet located in a system on the outskirts of the territory of the Spartax Empire.[1] The planet was once inhabited by a sentient race about whom nothing is known except that most of their population was wiped out by a plague of unknown origin two hundred years ago. Since the only survivors were those who fled, Torfa became known as a "poison planet."[2]

In recent years, the Galactic Council chose to relocate refugees whose planets had been destroyed by the Builders to Torfa,[2] a dead world that King J'Son of Spartax had volunteered for that purpose.[1] Refugees from at least five alien races, including the Argen, the Nowlanians and the Sentimault, travelled to Torfa to build a new home for themselves as the Federated Settlers of Torfa.[3].

Subsequently, King J'Son learned that there was Vibranium on Torfa, an element that he knew could be used to build an indestructible battlefleet to replace the one that had been decimated in the war against the Builders. Not wanting to pay the settlers for it, J'Son instead coerced come of the Sentimault refugees into secretly mining the Vibranium and hired the Haffensye to smuggle the extracted ore away from Torfa. However, since J'Son insisted on receiving the Vibranium as quickly as possible, the Sentimault were forced to use an unsafe older technique which released dangerous by-products into the groundwater[3] that caused the settlers to begin to sicken and die.[2] The settlers realized that the illness was caused by a poison[4] but the addition of radiation altered the symptoms enough to prevent them from identifying it as the archaic miners' disease known as Vibranium sickness.[3]

Unaware of the true cause of this new plague, the Galactic Council wanted to move the settlers again but they didn't have enough ships to move them all and the settlers refused to leave their sick behind.[2] For his part, J'Son wanted to get the settlers off the planet before his illegal mining operation could be discovered so he issued an ultimatum to the elected leader of the settlers, Madame Eleanides, giving them three days to choose one thousand of the youngest and healthiest to be evacuated and resettled elsewhere. The rest would be left to die, killed by Spartax forces that he was sending to the planet.[1]

Before the forced evacuation could take place, Captain Marvel (Carol Danvers) and some allies discovered that Vibranium was secretly being mined on Torfa and was the cause of the sickness and death.[3] Using this information, Madame Eleanides managed to trick J'Son into admitting his actions during a communication that he hadn't realized was being broadcast to Haffensye ships across the galaxy. With his activities exposed and the Vibranium mine having been destroyed by Captain Marvel, J'Son was forced to recall the Spartax forces.[5]

Like this? Let us know!
Retrieved from "https://marvel.fandom.com/wiki/Torfa?oldid=5797122"
Community content is available under CC-BY-SA unless otherwise noted.